On Black Friday, Snapchat introduced Promoted Stories, a new advertising format that allows marketers to get their messages to more users. The company’s existing Story feature is a stitched-together collection of photos and videos that disappears 24 hours after it is shared. Any Snapchat user (including a business or brand) can create a Story, but it will only be visible to that user’s followers. Promoted Stories, however, which will appear on the Stories page in the Snapchat app, will be pushed out around the country.

Recode reports that the new feature comes as the company has “already missed on its first three earnings reports” after going public. The hope is that Promoted Stories will “help generate more interest and revenue from advertisers.” 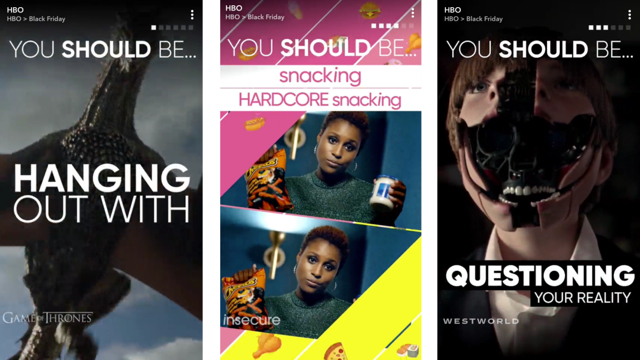 It also notes that the ads are “similar to an ad type Snap tested back in 2015,” when the company “sold a promoted Discover channel to Sony Pictures, which pushed its upcoming James Bond movie.” But that test was never expanded; advertisers have been limited to 10-second video ads at the end of Stories.

HBO was the first to run a Promoted Story on Black Friday; online retailer ASOS “also bought a promoted story in the U.K. and France.”

Business Insider reports that Promoted Stories “allows marketers to build a Snapchat-esque collection of content that will run in the Discover section,” that will “look and feel just like Discover content from partners such as MTV and Cosmopolitan.” Those who create Promoted Stories will be able to post three to ten so-called snaps (images, videos, animations) “that automatically advance after people click on the tile and ideally tell a complete story.”

HBO’s Story promoted the idea that users should stay home on Black Friday and binge on shows like “Game of Thrones” “as part of a free trial being offered by the pay TV network.”

It also notes that Snapchat’s “first ad was a trailer for the [2014] horror movie ‘Ouija’ that was given prominent placement on the app,” followed by “Spectre,” which “ran a full day story on Snapchat Discover” the following year.