Banjo Inc. has raised $16 million in Series B funding in its pursuit to become like a DVR for compelling social media content and conversations. Banjo offers a way to view aggregated, relevant social conversations about news and events attached to specific geographic locations or venues, all in one convenient stream. The startup recently released Android and iOS versions of its mobile app with a new Banjo Rewind feature that lets users access a past event to learn what people were discussing about it. 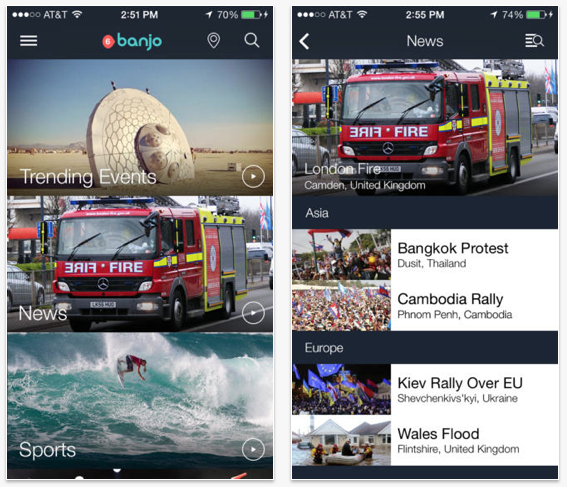 Banjo Rewind also shows users “what images and videos they were sharing from the event, and when and where it took place,” reports The Wall Street Journal. “Layered in with the user-generated social-media content are ‘featured posts’ that include photos or videos from newspapers, sports networks or other mainstream media.”

Banjo aggregates social posts from apps including Facebook, Google+, Instagram, Vine, Twitter and Europe’s VK.com. It uses algorithms to check the authenticity of comments, photos and videos, and filter out selfies and other irrelevant content.

The company was founded in 2011. While it is headquartered in Redwood City, California, most of its 30 full-time employees are now located in Las Vegas.

“Banjo makes money by selling an enterprise version of its app to media and entertainment companies, so that on air, or online, they can show their audiences what the social-media sphere is buzzing about, along with information and images that social-media users have shared, in proximity to a newsworthy or entertaining event,” explains WSJ.

Founder and Chief Exec Damien Patton said Banjo intends to use its new funding to build out tech infrastructure, hire engineers and designers, and develop trend-forecasting or predictive analytics capabilities that he expects will appeal to media and entertainment companies and possibly financial institutions.

Patton said Banjo can identify breaking news and buzzworthy global events before the trending features of leading social platforms such as Twitter and Facebook.