The numbers keep rolling in for the FIFA World Cup. Last week we reported that the Germany-Brazil semifinal set new viewing records and knocked out this year’s Super Bowl for the most Twitter activity during a sports event. Now it’s being reported that Sunday’s championship match between Germany and Argentina drew 30 million U.S. viewers, shattering the previous record for a final, thanks in part to the Spanish-language audience. Additionally, new usage records were set for Twitter and Facebook.

“ABC’s television broadcast of the game — which resulted in Germany’s 1-0 victory in extra time over Argentina — attracted 17.3 million viewers,” reports the Los Angeles Times. “That set a viewership record for a men’s World Cup Final match in the U.S.”

According to Nielsen fast nationals, the championship on ABC averaged a 9.1 rating. ESPN, ESPN2 and ABC combined to average 4,557,000 U.S. viewers for the 64 matches, marking a 39 percent increase over 2010.

We’re still awaiting international numbers, but at one point, nearly 21 million viewers were reportedly tuned in to ABC. And Univision’s Spanish-language broadcast drew 9.2 million viewers, also setting a new record in the U.S. Canada reported an average audience of more than 4.93 million viewers for the final match.

Some 1.8 million soccer fans watched the match via the WatchESPN streaming service, while another 450,000 watched on Univision’s sports app.

“However, among English-language viewers, the USA-Portugal game from earlier in the tournament was slightly more popular,” notes the LA Times. “That contest attracted 18.2 million viewers to ESPN; and another 6.5 million people watched on Univision.” 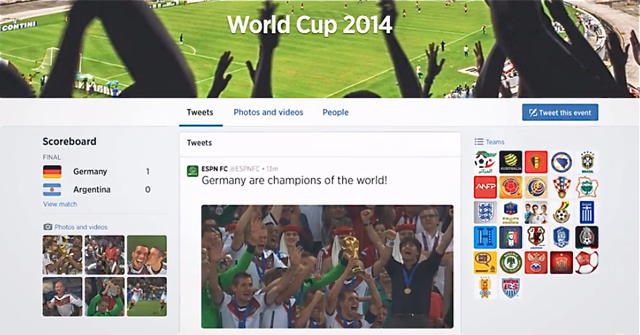 During the final match, some 88 million Facebook users contributed 280 million likes, posts and comments via the social network, marking the most-discussed sporting event ever on Facebook.

“The second notable figure is 618,725, which represents the tweets per minute during the game, which came at the end of the match, when Germany became the world champion for the first time since 1990,” reports The Wall Street Journal. “That’s a new record, Twitter says, surpassing the 580,166 tweets per minute during Germany’s 7-1 thrashing of hosts Brazil in the semifinals.”

In total, 32.1 million tweets about the World Cup final were shared during the match. However, the Brazil-Germany match generated 35.6 million tweets, maintaining the record for total number of tweets during an individual sports event.