John Riccitiello, CEO of game engine company Unity, set a course correction for virtual reality adoption in his keynote address at the Vision VR/AR Summit conference in Hollywood this week. Riccitiello warned, without equivocation, that analyst prognostications suggesting VR will become a $100 billion industry by 2020 “are wrong.” He assured the audience of 1,500 plus developers that VR is a transformative platform that will reap financial rewards in the long run and give birth to great “century companies” like Netflix and Disney.

Riccitiello pointed to business models referencing smartphone adoption as the root cause of the misinformation. Smartphones have been buoyed by carrier subsidies. On a technology level, VR is akin to the videogame platform, according to Riccitiello, but forecasters claim the VR industry will accomplish in five years what it took videogame companies 50 years to build. 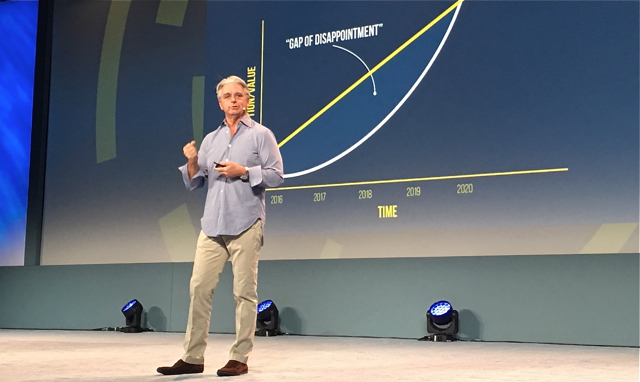 Riccitiello laid out his insider’s view of the VR industry’s trajectory. There are three hurdles that VR must overcome —cost, content and user interface — and they will be addressed. VR will be affordable, but not in 2016. Great VR content will be available, but not until 2017 or 2018.

For Riccitiello, Samsung’s Gear VR and Google’s Cardboard are not part of the picture because they do not incorporate VR’s full capabilities. (Sony’s PlayStation VR, HTC’s Vive and Oculus’s Rift, powered by hard drives rather than mobile devices, offer more fully immersive, interactive experiences.)

The likely outcome of the current hype machine, said Riccitiello, is bad press and a “gap of disappointment” brought on by fear when VR fails to hit the numbers. “Journalists will not be able to resist,” he said. “They have built it up and they will tear it down.” He urged technologists and content creators to ignore the press because VR offers a one-of-a-kind opportunity to partake in a change as notable as the birth of the printing press.

Later in the same keynote address, Unity announced pipeline improvements that will dramatically improve real-time rendering and open the door to better graphics. The company introduced a new scene editor tool that will enable content creators to build and modify scenes from within a VR platform.