Livestream announced a new product at CES called the Movi that helps budget-conscious videographers create the illusion that they have been shooting with multiple cameras instead of a single pocket-sized device. The product is designed for those shooting footage that can quickly appear dull when there is only a single viewpoint, such as a concert, school play, press conference or sporting event. Livestream will launch Movi as its own brand. Although it will integrate with the current livestreaming services, users can also simply record their video and share at a later time.

“No one wants to go home and edit for hours in Final Cut Pro… and certainly no one can afford to show up at an event with three cameras and cameramen,” said Livestream founder Max Haot.

The device is 2.5 inches tall and 4.6 ounces. It shoots 4K video and features a built-in microphone. 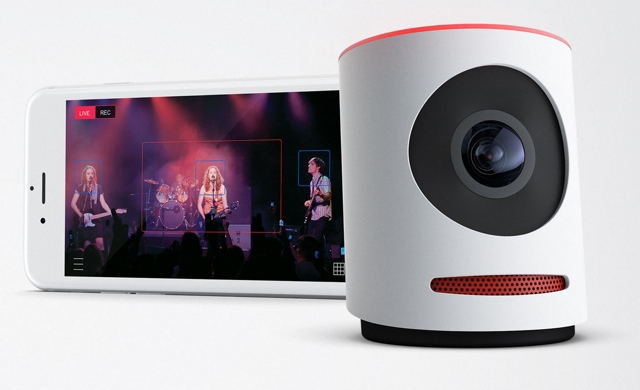 According to The Verge, Movi’s “lens has a 150-degree field of view — about as wide as most small action cameras, though not as wide as the 170-degree lens found on a GoPro.”

The battery lasts about an hour, but the Movi can also be plugged in, or the user can add the Movi Boost accessory that promises 10 hours of battery life.

“To use it, you put the camera in place, then use your iPhone (only iPhones will be supported initially) to edit on-the-fly,” explains TechCrunch. “Movi will automatically detect faces and other points of interest, so you just tap to cut between the different musicians at a concert or the different speakers at a press conference. You can also manually create points of interest or zoom at-will.”

Videographers also have the option of letting Movi handle the editing automatically. However, users should not expect the same results as with a live editor.

Image quality is affected by excessive cropping, or moving too fast with a pan or zoom, adds The Verge. “It also isn’t really made for live streaming spontaneous events — Periscope’s probably still your best bet there. But if you have an extremely tight budget and want to make it look like you hired a small army to shoot an event, the Movi looks like the best option around.”

The Movi will launch in April for $399; however, you can save $200 by pre-ordering online.