Forbes reports that Apple was a big winner on Black Friday. The article notes that InfoScout reviewed more than 90,000 shopping receipts in the U.S. and learned that Apple products accounted for 22 percent of Target’s sales on Black Friday. The iPad Air 16GB, iPad mini 16GB and iPad Air 32GB models were the number one, two and three sellers, respectively. Additionally, the iPad mini 16GB model was the number one seller at Walmart.

“Walmart announced that it sold 1.4 million tablets between 6 pm and 10 pm on Thursday and previously said that it had ordered twice as many tablets as it had last year for the weekend,” reports Forbes. “InfoScout also determined that roughly 40 percent of its Black Friday iPads were bought by Android smartphone users. This is an interesting datapoint (but only one) that shows the strong position of Apple’s iPad and the iOS ecosystem.” 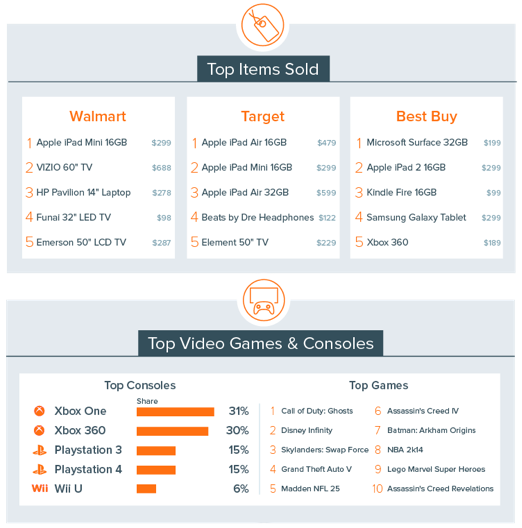 In related news, according to the Consumer Electronics Association Black Friday survey, tablets were the most popular device purchased. “Of the estimated 35 percent of shoppers who bought consumer electronics products during the holiday weekend, 29 percent bought tablets,” writes Carolyn Giardina for The Hollywood Reporter.

“Headphones (24 percent), video game hardware (21 percent), smartphones (19 percent) and laptop/notebook computers (17 percent) were the next most commonly purchased consumer electronics products during the first two days of the holiday weekend, the survey found.”