In response to the evolving user base of popular social networks such as Facebook, a new venture called Blend hopes to return social media to a younger crowd with its app designed exclusively for undergraduate students. San Jose, CA-based Blend currently enables users to share photos and win gift cards, but has plans to become more of a social network with interactive features like commenting. Founded in May 2013, Blend has nine employees, including its three young co-founders.

The company, presently in another investor round, has already raised $125,000 from Silicon Valley angels and $1.2 million from incubator the Digital Catalyst Fund.

Co-founders Akash Nigam, Matt Geiger and Evan Rosenbaum met in school. Nigam and Geiger grew up in Silicon Valley and went to the same high school. Both dropped out of their respective undergraduate colleges. Geiger met Rosenbaum while attending the Wharton School of the University of Pennsylvania. 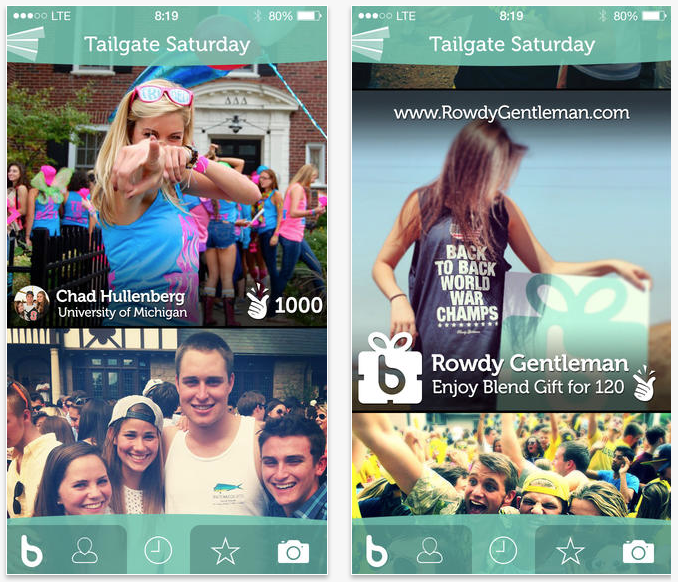 “Over the last three years the number of teenagers using Facebook has declined by 25 percent, while the number of users 55 and older has gone up more than 80 percent,” reports The New York Times. “The founders say college students are tired of using a social network where their parents, grandparents and future employers can see their updates.”

Blend works by posting a daily theme relevant to college students, such as “Tailgate Saturday” or “Library Shenanigans.” Students post related photos in hopes of receiving “snaps” (similar to “likes” on Facebook) from other users. The snaps can then be exchanged for gift cards from brands that advertise on Blend.

“Blend has four seasonal campaigns — back to school, winter holiday, spring and summer — and brings different retailers onto the site depending on the campaign,” notes NYT. “Once a brand is identified as a potential Blend retailer it has to be approved by student representatives — Blend calls them ‘influencers’ — who hold events, wear silly costumes and employ social media to build awareness of the app on campus. Retailers that get the thumbs up from the reps are then evaluated by Blend’s management, based on a variety of measures that include average price point, annual revenue generation and percentage of sales to college students.”

Blend currently has more than 60 brands advertising and providing gift cards. The app (iPhone and Android) has more than 50,000 active daily users across more than 1,000 college campuses.

Related:
For Millennials, There is No One True Social Network, Re/code, 2/5/14