Oculus debuted Parties and Rooms for the Samsung Gear VR mobile headset, a significant move in making virtual reality more social. Parties allows a multi-person conversation to take place on top of whatever else the individuals are doing in VR, and Rooms is a digital lounge where up to four people can gather to watch videos, play simple games or just relax. Facebook also just launched its “Coordinated App Launch API,” which will enable those friends hanging out in Rooms to launch a developer’s multiplayer game.

TechCrunch says that, “the Coordinated App Launch API could make Oculus the portal to playing with friends in VR, giving it immense power over developer experience discovery.” Developers can also “try out Livestreaming so they can share their experience back to Facebook for people without a headset.” 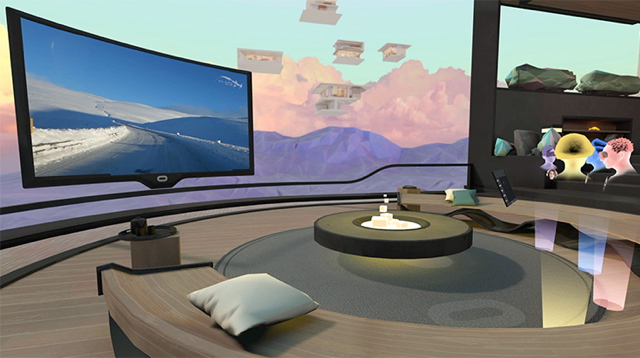 Oculus product manager Madhu Muthukumar notes that Room is “a physical place where we can all go, and you can have interactions like you’re inviting you friends to your apartment.” Whereas Oculus’ Toybox social VR app requires controllers, Rooms — which TechCrunch says competes with Altspace — lets you “tap the touchpad on the Gear VR to navigate.”

According to Fast Company, Muthukumar reports that, although Rooms and Parties could work on the PC-based Rift, Oculus chose to launch them for mobile virtual reality for two reasons: “to take advantage of the fact that there are more than a million Gear VR users” and because the company has “had a year of experience building for mobile VR and we just know more about that.”

For now, available video is only through Facebook: what is popular or what the user and her friends have shared there. Muthukumar says the company “may expand that to include outside video sources.” One hack, reports Fast Company, is to activate Altspace through the Coordinated App Launch to watch YouTube videos.

Overall, says TechCrunch, “the Rooms experience felt remarkably natural.” “Playing games in VR can make you feel isolated,” it reports. “But by assembling your friends, Facebook and Oculus can use their natural aptitude for social to make your virtual reality experiences something worth remembering. If Oculus owns the way you congregate in VR, it could use network effect to entrench itself as the premier virtual platform.”