AR Experiences a Breakout Year, More to Come at CES 2017

Until “Pokémon Go” burst onto the scene last summer, augmented reality was developing quietly in the shadow of virtual reality. With the spike of awareness around the success of “Pokémon Go,” we are rapidly redefining and evolving our ideas of what an AR experience can be. The AR landscape includes developers, storytellers, world builders, platforms and SDKs, apps and browsers, glasses and lenses, image recognition, spatial audio and spatial awareness tech, haptic feedback and other sensory input/output tools, agencies, research institutions, and more. We expect AR to be a major topic at next month’s CES 2017.

This year saw the release of Microsoft’s HoloLens, the Meta 2 from Meta, the R-7 Smartglasses from ODG, and other fully integrated head-mounted displays. These HMDs allow you to directly see the world around you as the HMD projects virtual objects into your line of sight via either “curved mirror” projection from above onto a semi-transparent lens or “wave guide” projection through the side edge of the lens.

As AR HMD tech and design is refined and miniaturized, AR HMDs could become full-day wearable technology and a viable substitute for TVs, computers, phones, and other screen-based and audio-based CE devices. 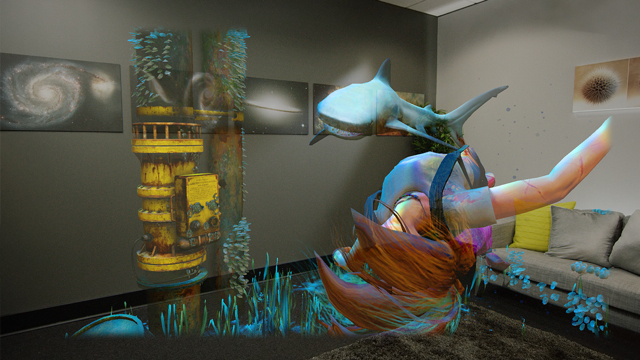 “Fragments” (above), a location-aware AR high tech crime thriller developed on the HoloLens, is a good example of how AR storytelling engagement can be projected into any space (including your home).

In early December, Occipital launched its Bridge, the first AR mobile-phone headset for the iPhone. The Bridge uses the iPhone’s camera to capture the world in front of you, a structure sensor to map and monitor the space in front of you, and the iPhone processor and display to blend real and virtual images together. Because of latency involved in processing, pass-through displays show you an image of what was in front of you a few milliseconds in the past, so don’t try to catch any fast objects thrown at you while wearing it.

The first full AR phone from a major manufacturer, the Lenovo Phab 2 with the Intel RealSense depth- and heat-sensing camera chip and Google Project Tango computer vision functionality, was released this summer with a $499 MSRP.

This year also saw the continued growth of AR experiences that take advantage of the capabilities already built into the smartphones that consumers already own. Blippar and many other companies use QR code and image recognition to create ‘living’ advertisements and books. The developers of the “Night Terror” AR experience ask the audience to walk around their home so their phone can map the layout, then turn out the lights, put on headphones, and explore your personalized haunted home.

AR is not limited to wearables and pocketed CE devices. A number of carmakers are experimenting with heads-up displays for navigation and other interactions while driving. Many concept implementations of this will be shown at CES in the new Self Driving Technology Marketplace across Paradise Road from LVCC North Hall.

Navdy, a dashboard-mounted AR navigation and communication system, just received funding from Harman and will be on display in that area at CES. A number of startups are experimenting with computer vision enabled cameras and projection systems to enable AR on the factory and assembly line floor without the need for wearables.

The U.S. Senate held its first hearing on the potential applications and policy considerations of AR on November 16. Witnesses included representatives from Niantic Labs, DAQRI, the Entertainment Software Association, and University of Washington.

The worlds of AR, IoT, and AI are becoming intertwined. Spatial awareness is necessary to properly project virtual objects and sounds into the real world. The Internet of Things will inform what information can be available. And AI will help determine what data and information will be most valuable at every given moment.

At CES, 214 companies self-identify as AR and/or VR, 19 claim the keyphrase ‘artificial intelligence,’ 29 claim ‘Internet of Things,’ and 148 claim ‘IoT.’ Twenty four companies are clustered in the Augmented Reality Marketplace between spaces 26929 and 26044 in LVCC South Hall Lower Level.

ETC’s team will be reporting daily from CES 2017 on the latest in augmented reality and related technologies.