When “Assassin’s Creed” opens in U.S. theaters on Dec. 21, moviegoers will get a chance to experience the cinematic version of a role-playing game via virtual reality. At select AMC theaters, the moviegoer can put on an Oculus Rift VR headset and become a passive character in an action scene with star Michael Fassbender. To create this challenging VR experience, the movie’s producers teamed with chipmaker Advanced Micro Devices (AMD), which provided graphics expertise in exchange for being associated with the popular franchise.

Bloomberg reports AMD virtual production director James Knight saying that, “of the more than 20,000 people expected to watch the ‘Assassin’s Creed’ promotion, 99 percent will probably be trying VR for the first time.” The producers of “Assassin’s Creed” aren’t alone in trying out VR as a marketing tool. 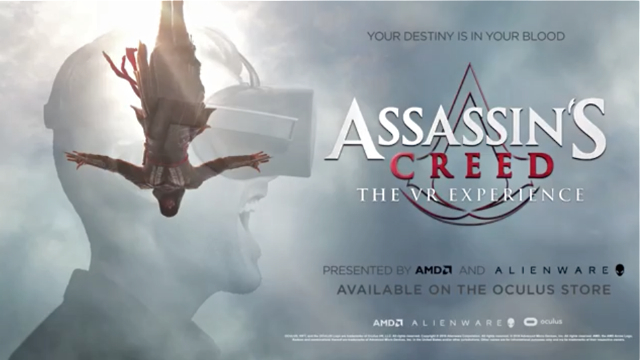 “The brands that start to experiment in VR now will have the muscle memory to do so when it’s big — and they’ll have a competitive advantage,” said ad agency MEC North America exec Noah Mallin.

Not every company can afford the expense of a full-fledged VR experience, so some are relying on ads shot in 360-degrees via multiple cameras, “as close as you can get to virtual reality without breaking the bank.”

One company that went that route was liquor-maker Diageo, which produced a 360-degree PSA that can be watched with a Samsung Gear VR, Google Daydream or Google Cardboard. Diageo senior vice president Dan Sanborn reports that, “viewers experience a crash from the point of view of a passenger riding in a car — the drunk driver’s arms flailing, glass shards flying past and the vehicle flipping on its side.”

To market its used cars, Vroom opened pop-up booths in Phoenix-area malls, where shoppers can put on an HTC Vive headset and see 3D versions of the vehicle inventory, and navigate around cars they are interested in. The VR experience has been such a success that the company added iPads so interested customers could shop for cars they expressed interest in buying.