Comcast inked deals with Universal Pictures (which it owns), Lionsgate, Paramount Pictures and Sony Pictures Entertainment for “movie extras” to accompany those studios’ film titles. The cable company, which will offer a free sample of the enhanced extras during the 10 days leading up to Christmas, says it is working on adding more studios and movies in the coming year. With the extra content, Comcast hopes to better compete with other digital movie providers, including Apple, which added extra content two years ago.

Variety reports that the enhanced movie extras include “16 online interactive experiences such as games, maps, 360-degree maps and set tours” as well as “photo galleries and video clips that are updated as the movie plays.” Comcast X1 customers, who “will have access to interactive and context-based content directly within the movie-watching experience,” can watch via X1 set-tops, on the Web, and on Xfinity TV video apps. 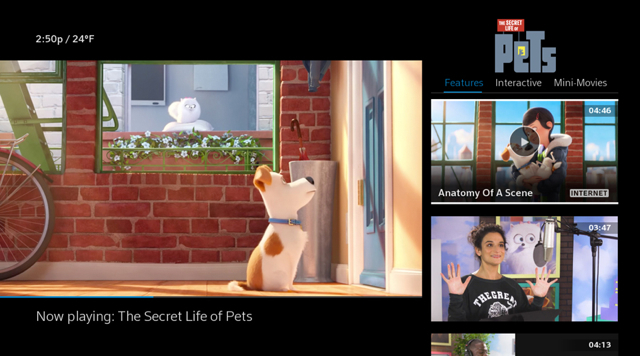 “X1 is an immersive, dynamic platform that enables us to continually provide our customers with one-of-a-kind experiences,” he said, also noting that “Comcast is actively working with other programming partners to deliver enhanced entertainment experiences for all content including movies, events, sports and news.”

Comcast, the nation’s biggest cable operator, entered the electronic sell-through market in 2013 and “now offers TV shows and movies, in some cases weeks ahead of DVD release, for purchase.”