ESPN has introduced MultiCast, a feature for its App for Apple TV’s tvOS that allows viewers to watch up to four simultaneous live streams from the network’s 60,000+ hours of annual programming and more than 30 live events on any given day. The network is also debuting version 5.10 of its iOS and Android app with a “Watch” tab allowing viewers to watch live-streaming events and shows featuring their favorite teams. The new version also offers ESPN3 replays, adding to the current long-form video and on-demand highlights.

Variety reports that ESPN anticipates the MultiCast feature will “be popular during college football Saturdays, as well as for events like the College Football Playoff National Championship ‘megacast’ [and] the U.S. Open multicourt coverage.” 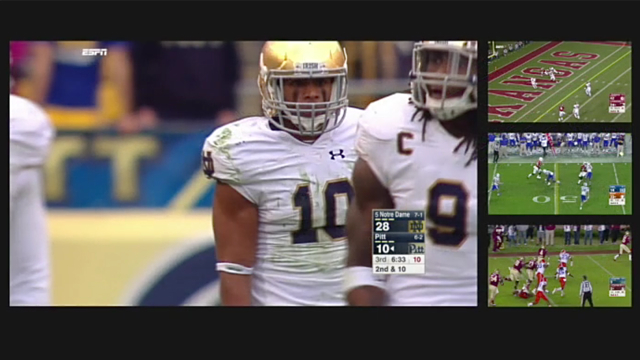 “We want to take advantage of all the unique content we have, and make something only ESPN can do,” said ESPN executive Ryan Spoon, who added that the company will make the MultiCast feature available for other smart TV devices, but launched first with Apple TV because it “has capabilities to do this that other platforms don’t have.”

ESPN is also slated to debut its direct-to-consumer video service — which won’t include NFL or NBA games — in early 2018, through its ESPN Apps, which will “include a free, 10-minute preview of a live event, available to non-authenticated users for free.” The network plans to drive subscriptions by, at the end of the preview, asking viewers to “sign in using pay-TV credentials to keep watching.”

With the MultiView feature, also new on the ESPN App for Apple TV, the user can “swap the primary screen, flip audio, expand to full screen, and choose how many live streams appear on the screen and in what configuration.” Variety reports that, “down the road, too, ESPN is thinking of using the other tiles in the MultiCast for content aside from video,” such as “in-game highlights, fantasy sports updates, alerts, scoreboards or social-media posts.”

“So much of what we’ve done on our digital platforms is putting more control into the hands of our fans, whether that’s a single stream on a 5-inch phone on your pocket or the ability to merge all your favorites on your 60-inch screen,” said Spoon. The network plans to promote the new features with a “Take ESPN Everywhere” campaign between August 28 and September 4.