RADAR was tested with shoe company Toms, explains The New York Times, which “said it found a rise in brand awareness and purchases.” The service relies on AT&T Data Patterns, which collects location data from its subscribers; PlaceIQ, which uses location data from other apps; and Placed, which pays consumers for the right to track their movements. 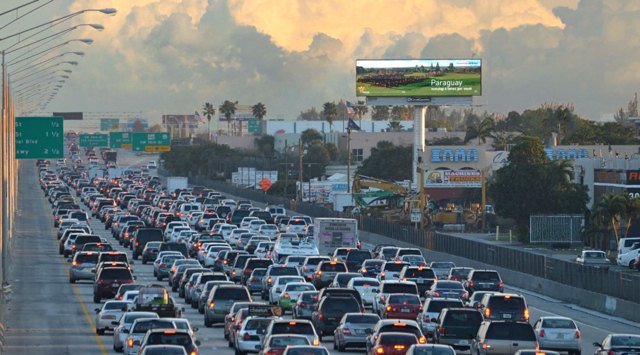 The data resulting from RADAR can “determine the average age and gender” of people who see a billboard, where and when they see it, and whether they subsequently visit a store. “In aggregate, that data can then tell you information about what the average viewer of that billboard looks like,” said Clear Channel Outdoor executive Andy Stevens. “Obviously that’s very valuable to an advertiser.”

Privacy advocates are up in arms about RADAR, which even Stevens admits “does sound a bit creepy.” But, counters Clear Channel Outdoor, all data is anonymous and aggregated — and “the same data mobile advertisers have been using for years.”

Mobile tracking has been scrutinized by privacy groups. “People have no idea that they’re being tracked and targeted,” said Center for Digital Democracy executive director Jeffrey Chester. “It is incredibly creepy, and it’s the most recent intrusion into our privacy.”

The Federal Trade Commission has also gone after a handful of companies collecting geolocation information via mobile device tracking, settling charges against an Android app that turns mobile devices into flashlights, for sharing data with advertisers, and a retail-tracking company that uses signals from shoppers’ mobile phones to track their movements through stores.