Apple plans to launch iTunes Radio next month along with brand partners including McDonald’s, Nissan, Pepsi, Procter and Gamble, and possibly others. Apple’s new offering plans to compete with current streaming radio services such as Pandora. While the launch partners will benefit from exclusivity until the end of 2013, iTunes Radio will later be available to other advertisers. Apple also hopes to generate revenue by providing users with the option to purchase songs played via the service. 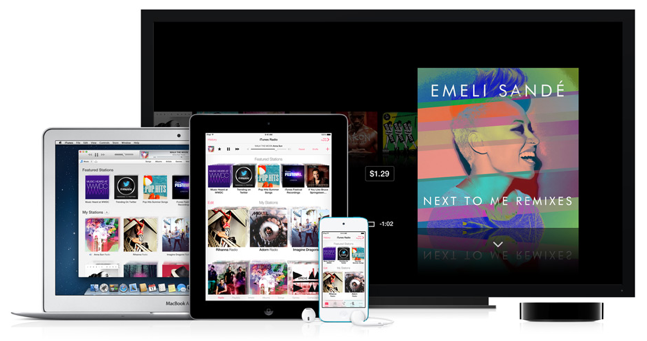 “Advertisements on iTunes Radio will come in three forms: interstitial audio and video ads and ‘slate’ ads; interactive display ads that will take over whatever screen the consumer is using. That includes iPhones, iPads, all desktops and laptops loaded with iTunes (including Windows PCs) and Apple TV, the Apple device that brings Internet connectivity and apps to TVs.”

Audio ads will be served every 15 minutes, while video ads will be scheduled every hour. Beginning in 2014, advertisers will have the ability to target devices, with cost increasing based on screen size.

Some partners will curate playlists and offer listeners blocks of music that have fewer ads than other iTunes Radio stations. Apple will also provide users with an option to enjoy iTunes Radio ad-free.

“iTunes Radio will be a free, ad-supported service to the public, but Apple will be offering an ad-free option to anyone who purchases iTunes Match, a cloud-based music storage feature that allows users to access their libraries on any Internet-connected Apple device,” explains AdAge.

“Apple and its music industry partners think that iTunes Radio’s greatest revenue generator will be its ability to get users to actually buy music. A purchase button will be placed next to every song played on the service in an attempt to get users to permanently add title to their iTunes library,” notes the article. “It’s a move against other music-streaming companies’ strategy of allowing users to passively listen to songs interrupted by ads or to charge them a premium for the ability to play songs on demand and listen to ad-free digital radio.”