ABC relaunched its streaming service yesterday to attract cord cutters with an increased number of TV shows and a collection of new digital originals. The network is introducing seven digital short-form series that focus on comedy and lifestyle, with more than 40 digital programs in development. The content is available via the free, ad-supported app and online at ABC.go.com. The app is debuting a redesigned user interface for iOS devices and Apple TV boxes. In addition, pay TV subscribers will have access to exclusive content and, in select markets, the ability to view live television.

“According to the network’s SVP of Digital Media, Karin Gilford,” reports TechCrunch, “the goal with the revamped service is to re-imagine the digital viewing experience for ABC fans by offering a combination of shows that viewers love alongside originals that are ‘fun, fresh and perfect for mobile,’ she said in an announcement.” 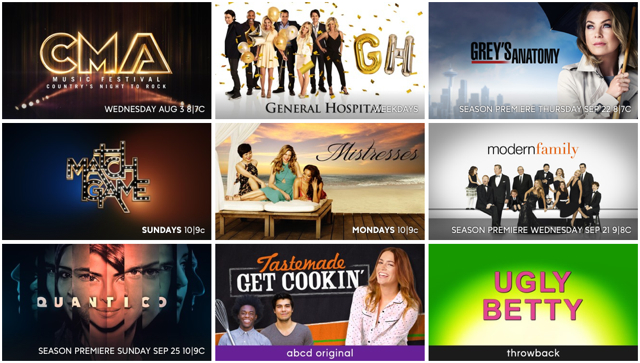 The expanded TV lineup includes “My So-Called Life,” “Ugly Betty,” “Ellen” and others. “Both the library shows and the originals will be available to all users, even if they don’t sign in with their pay TV credentials,” notes TechCrunch. “However, the latest episodes of currently airing TV shows still require viewers to subscribe to cable or satellite television in order to watch.”

Topics of the new originals include gay marriage, aspiring songwriters, cooking and new moms. New programs will roll out on a monthly schedule.