In the wake of an eventful year for television technology, January’s Consumer Electronics Show is expected to feature a slew of new announcements, most notably, perhaps, involving a new wave of LED LCD sets possibly filling the void left by plasma. In October, Panasonic announced it would stop manufacturing plasma TVs. While LG and Samsung will likely introduce new plasma models in 2014, compelling features of affordable LED LCD models could possibly take center stage.

“A lot of stuff happened in 2013, and it was an especially eventful year in the TV market,” notes CNET. “For the first time mainstream TVs with 4K resolution, all of them LED LCDs, appeared — and then promptly fell in price. After years of fits and starts, the first OLED TVs went on sale — and stayed expensive. 3D TV basically died […] and Evolution Kits, input lag and projectors were all newcomers.”

And while we could see more OLED sets at CES in Las Vegas, CNET suggests that cost will prevent them from going mainstream. 4K and curved OLEDs are referenced as “unavoidable trends” in the article, and we should expect to see a range of related models with large screen sizes and high price tags.

However, the article predicts that affordable, effective “local dimming” — as featured in the Vizio E series ($498-$692, pictured here) — will push LED LCD above the competition next year. 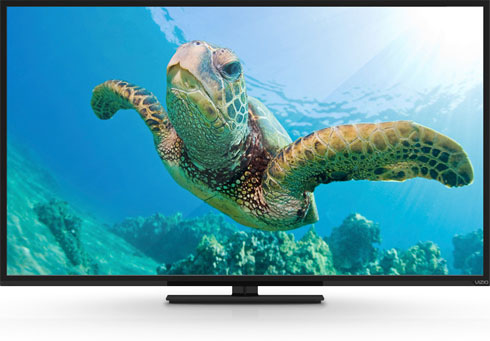 “If you’re not familiar with local dimming, it’s a technology that allows LED LCDs to overcome one of their biggest picture quality problems — grayish, washed-out renditions of black — by selectively dimming and brightening different parts of the screen,” explains CNET. “Done right, it works wonders. The best-performing LED LCD TVs of 2013, including the Samsung F8000/F9000, the Sony W900A and the Vizio E and M series were all local dimmers.”

“Every TV maker will introduce at least one line with 4K resolution, nearly all will have HDMI 2.0, and prices will continue falling,” CNET adds. “4K TVs will take the place of 1080p TVs as the flagship models, so if you’re buying a high-end LED LCD TV in 2014 — for example, one with local dimming — chances are it’ll have 4K resolution whether you want it or not.”

For the latest in TV trends (and more), ETCentric will report live from the CES show floor January 6-10. And check back with us next week for more on TV, including news of some very large curved sets from LG and Samsung.