A virtual reality headset by Avegant could hit the mainstream market in 2014. Glyph, Avegant’s $499 Virtual Retinal Display headset, looks like a pair of headphones. In fact, it is a pair of headphones, but when flipped forward over your eyes, it becomes a high-res display that’s comparable to watching an 80-inch TV. Glyph, however, doesn’t have a screen. It projects images directly into your eyes using two million micromirrors, which reportedly do not cause eye fatigue.

“I’ve only seen a couple of early prototypes of the Glyph,” The Verge reviewer David Pierce writes. “But the picture I see already looks beautiful: high-res, colorful, and accurate, with none of the screen-door effect or pixellation of a device like the Rift.” 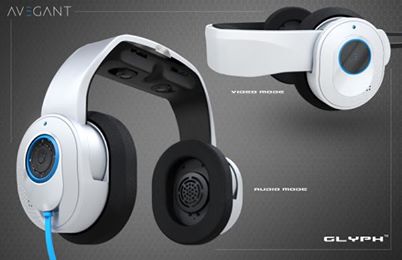 Pierce adds that a Virtual Retinal Display like Glyph is also lighter, requires less power, and can project a much sharper image than other similar devices. All it takes is adjusting the device to your vision.

“We’re trying to recreate your vision as closely as possible,” Avegant CEO Edward Tang tells The Verge. “Look at how you naturally see. When you look around the room, your eyes don’t get tired. You can see 3D. And you don’t get nauseous or get headaches around the normal world.”

Everything we see in real life is simply light reflected off something else, and that’s what the Glyph is, too. The article explains that Glyph technology is simply reflected light — and the headset reflects light off of two million micromirrors and into your eyes. “There is no image, no screen; pictures exist only in your retinas and your brain.”

The Glyph’s only real challenge, Pierce writes, is its social acceptance. “Will people want to wear a device that turns from hefty headphones into a wild, Cyclops-style visor? So many people are perfectly content playing games on the small screens in their pockets; can Avegant convince them to want something more?” The headset’s Kickstarter pre-order campaign, launching in January, will determine that.

At January’s CES, Avegant will be part of the TI Village in Suite N116. For more information, check out this week’s press release.