Retail giant Walmart announced the launch of its free, ad-supported streaming video service called Vudu Movies On Us, which offers thousands of titles available for 1080p HD streaming, and supports Dolby Digital sound when available. Vudu has been selling and renting movies and TV shows for almost 10 years. The new service, however, will not feature new releases or current series. Instead, it will focus on older blockbusters and classics. Vudu considered developing a subscription VOD service, but opted for the ad-supported model since the majority of Walmart customers expressed interest in free or discounted video services.

“There’s no better value than free,” said Vudu VP and GM Jeremy Verba. “We see a gap in the marketplace for watching free HD movies on-demand.” 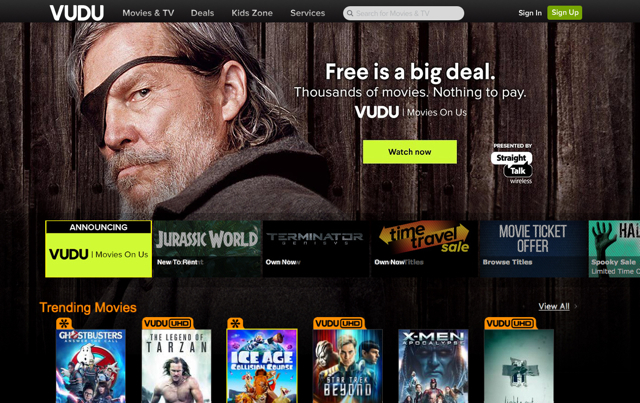 “While Amazon’s Prime Video is a perk that comes with an Amazon Prime membership, then offers a variety of commercial-free movies and TV shows, including originals, Vudu Movies On Us will not have new releases,” reports TechCrunch.

The new venture enables Walmart to enter the SVOD market without the significant cost of competing with Amazon, Hulu and Netflix by creating its own exclusive content library of premium content. Instead, Vudu’s offering will compete with ad-supported services such as Sony’s Crackle and the recently launched Yahoo View, “the new home for Hulu’s free content,” notes TechCrunch.

The service will carry limited pre-roll and mid-roll commercials. New York-based Ooyala is the main ad sales and tech partner.

“Vudu’s free streaming service, besides generating new ad dollars, will give it a funnel of potential new customers for its core transactional business offering more than 100,000 titles for rent or purchase,” adds Variety. “Ever since it launched in 2007, Vudu has focused on delivering high-end digital video tech and earlier this year became the first service to integrate 4K Ultra HD with Dolby Vision HDR and Dolby Atmos Audio.”