Snapchat is making moves to become more conversational, more “sticky,” and to keep users engaged for longer periods of time, according to Variety. The social sharing company announced a new chat feature that allows up to 16 users to video chat through its app, and added mentions to its Snapchat Stories, allowing users to easily tag others (much like they would via Twitter). The chat feature will roll out across the globe this week and will come with filters and the ability to join by audio only as desired. Users can also reply via text messages.

“Mentions are part of Snapchat’s efforts to put a bigger emphasis of interaction between its users, something that the service has been focused on ever since it rolled out a redesign of its app earlier this year,” reports Variety. “Video chat on the other hand directly competes with a number of chat apps catering to teens, including Houseparty and Facebook’s Bonfire app. Facebook also added group video chat to its Messenger app last fall.” 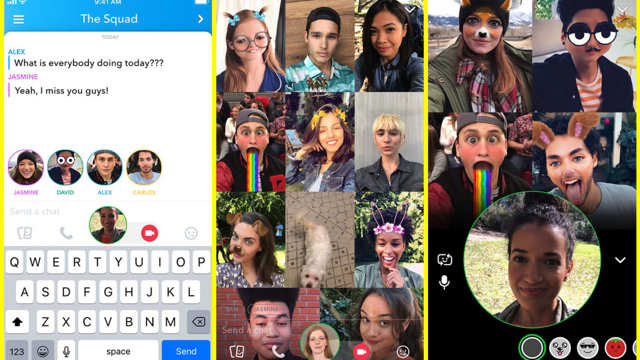 A related article in Recode notes that “video chatting with your friends is more in line with private messaging than anything. The feature means more competition for Messenger and Skype, which also offers group video chats. But it’s probably really bad news for Houseparty, the group video app that spun out of Meerkat and has been popular with teenagers. Snapchat is also popular with teenagers, so the two user bases likely overlap.”

“The idea is to give Snapchat users more ways to use the app for their day-to-day communication,” according to Recode.

Related:
Snapchat Takes a Jab at Instagram and Calls Itself a ‘Camera’ in First TV Campaign, AdWeek, 4/1/18