Snapchat is making moves to become more conversational, more “sticky,” and to keep users engaged for longer periods of time, according to Variety. The social sharing company announced a new chat feature that allows up to 16 users to video chat through its app, and added mentions to its Snapchat Stories, allowing users to easily tag others (much like they would via Twitter). The chat feature will roll out across the globe this week and will come with filters and the ability to join by audio only as desired. Users can also reply via text messages.

END_OF_DOCUMENT_TOKEN_TO_BE_REPLACED

Facebook just launched its new personal assistant, M, to a few hundred San Francisco Bay Area users. Unlike Apple’s Siri or Microsoft’s Cortana, however, M is not just powered by artificial intelligence. M does all the same things that Siri and Cortana do, but it adds a team of experienced customer service reps to accomplish more “human” tasks such as calling the cable company and enduring automated messages and holds. Facebook is disadvantaged on mobile devices, but the company hopes its efficiency will spur usage. END_OF_DOCUMENT_TOKEN_TO_BE_REPLACED

At this week’s F8 developer conference in San Francisco, Facebook announced that it is opening up its Messenger app with a platform for creating apps. This will allow developers to build apps that can integrate with the social network’s instant-messaging service, which presently touts 600 million users. Nearly 50 integrated apps have been created under the program, including those from Bad Robot, ESPN and The Weather Channel. The service also supports 360-degree video with Facebook’s Oculus VR format. END_OF_DOCUMENT_TOKEN_TO_BE_REPLACED 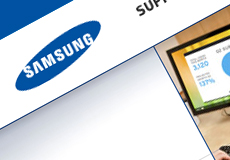 Samsung ChatON: Do We Need Another Instant Messaging Service?