The Verge reports that Oculus Go already gives access to Hulu, Netflix and Showtime, all of which have standalone apps, with similar options for the Oculus Rift and Samsung Gear VR. The difference is that, “these apps will simply launch from within Oculus Go, rather than being directly merged with it.” 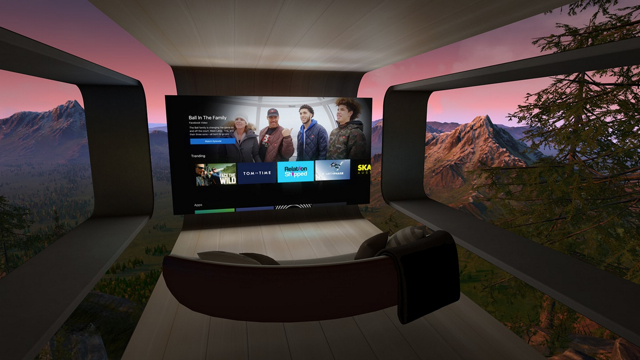 Oculus stated that it is “working on supporting more networks, including ESPN.” Although the 180-inch screen “will look a bit fuzzy with the Oculus Go’s limited resolution,” and “Oculus TV also conspicuously doesn’t support YouTube … it’s a decent option for people who want to watch television without distractions or who don’t want to wake up a child or significant other with a glowing screen.”

Variety reports that Facebook built the Oculus TV app because, “video viewing has proven to be immensely popular on mobile VR headsets, with Samsung reporting early on that 80 percent of the users of its Gear VR headset were watching video with the device on any given day.” Even so, “Oculus TV is still very much a work in progress.”

Although Facebook vice president of VR Hugo Barra likened Oculus TV to “a smart TV, but for your VR headset,” and “the result really does look and feel like a smart TV of sorts,” it only offers two rows of apps/content, the first being “a pretty generic showcase of some of the content featured on Pluto TV, Hulu and Red Bull TV, and the second one offers shortcuts to installed and suggested video apps.”

Oculus Go also took 23 seconds to load up a selected Hulu show, and “the Netflix VR app doesn’t offer any deep linking at all — which makes visiting Oculus TV a bit redundant in the first place.” There is also “no universal search across the apps and services available on Oculus TV, and some just don’t work very well with the interface.”

Executives from two video services spoke anonymously to Variety, saying that, “the number of users of the Oculus Go simply didn’t warrant building apps for the device at the current time.” As such, Oculus TV is “struggling with some of the very issues that traditional smart TV makers have been grappling with for years … Facebook is learning the hard way that building smart TVs isn’t easy.”