“It’s all about the story” was the message of Chris Cookson’s keynote address, and a recurring theme throughout the first day of the NAB Show’s Technology Summit On Cinema: The Future of Motion Imaging and Sound (TSC), produced in partnership with SMPTE. The essence of cinema is storytelling, he said. Cinema is the canvas for storytellers to convey their ideas to the audience. Throughout his talk, Cookson used cinema in the broadest sense, to include content viewed in theaters, on TVs, and on laptops, tablets and phones.

The key difference between interactive storytelling and gaming, he posited, is the storyteller guides the audience through the story even when the audience influences story elements, while the gamer chooses the story’s path and outcome. 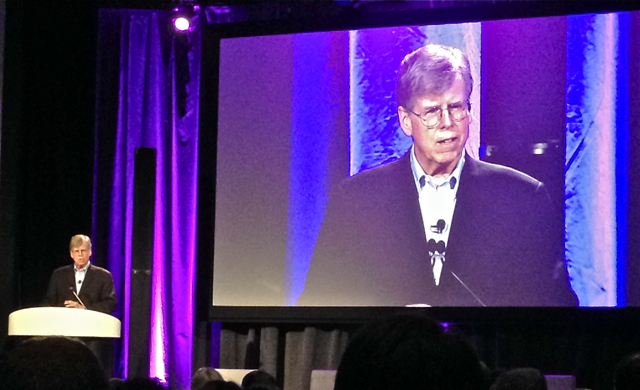 That is not to say that gaming technology can’t be used in storytelling. Cookson referenced next month’s NeuroGaming Conference and Expo, where developers will discuss the latest emotional, cognitive, sensory and behavioral technologies to create radically compelling experiences. While targeted to the game developer community, the technology could just as easily be used within a storytelling experience.

Technology should service the storytelling process, both as the story is being created and as it is being experienced. When technology gets in the way of storytelling, such as the historic case of having to wait overnight for film dailies, there are opportunities for improvements and new processes. Successful technology tools are so powerful that the storyteller can intuitively use them and focus on telling the stories. Cookson spoke of many technologies on the horizon for storytellers, adding that business models will influence what tools are used.

Our job, he said, is to make the technology disappear. Even when there is a huge amount of technology involved in the telling, it is ultimately all about the story.

TSC was a 2-day forum that took place over the weekend in Las Vegas with a focus on content creation technologies and workflows for production, post-production, exhibition, and conversion workflows for aftermarket.

According to the SMPTE press release: “Chris Cookson, who has served in senior technology executive roles at Sony Pictures and Warner Bros. and is widely considered a technical visionary in the industry, will take a look ahead with his TSC keynote, ‘Cinema: Act 2, The Future.’ This conversation will continue through a subsequent roundtable discussion moderated by Michael Karagosian and will include Matt Cowan, chief engineer, Entertainment Technology Consultants; Rob Hummel, president, Group 47; and Howard Lukk, vice president of production technology at The Walt Disney Studios.”