The recently released FireChat mobile app stands out from competitors as the only messaging app that can be used without cell phone reception. FireChat makes use of Apple’s multipeer connectivity introduced in iOS 7, which enables phones to connect with each other directly via Bluetooth or Wi-Fi. FireChat users within 100 feet of one another can exchange messages without sending data through a cellular provider. A future of similar apps not reliant upon the Internet could open new possibilities and address privacy concerns.

Currently, the multipeer connectivity of iOS 7 only supports data moving directly between two devices and between one and several devices. 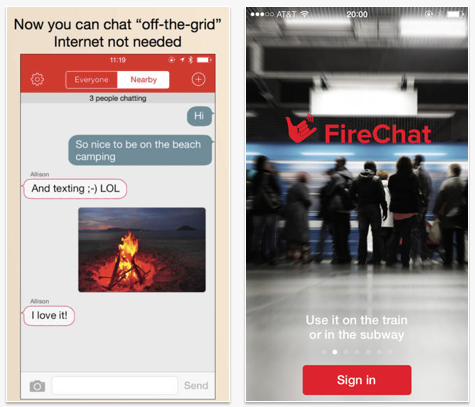 “However, Open Garden’s forthcoming software will extend the feature so that data can hop between two iPhones out of range of one another via intermediary devices,” reports MIT Technology Review. “That approach, known as mesh networking, is at the heart of several existing projects to create disaster-proof or community-controlled communications networks.”

The approach could also provide an alternative for those concerned with privacy and security issues, since the message data could not be harvested by an attacker or government agency. However, peer-to-peer and mesh networking apps could be at risk from eavesdroppers who are using a device within range.

“Besides being a new approach to privacy concerns, this new mesh network could be a way for creators to develop apps that bypass ISP charges,” Phil Lelyveld of ETC@USC suggests.

“Micha Benoliel, CEO and co-founder of startup Open Garden, which made FireChat, says the app shows how smartphones can be set free from cellular networks,” notes the article. “He hopes to enable many more Internet-optional apps with the upcoming release of software tools that will help developers build FireChat-style apps for iPhone, or for Android, Mac, and Windows devices.”

“This approach is very interesting for multiplayer gaming and all kinds of communication apps,” he said.