The ongoing effort to utilize new technologies in the service of storytelling was the theme of USC School of Cinematic Arts (SCA) Dean Elizabeth Daley’s keynote address Sunday at the SMPTE Technology Summit on Cinema at NAB. Digital technology is deeply engrained throughout the SCA curriculum. In fact, the Interactive Media & Games Division and the John C. Hench Division of Animation and Digital Arts wouldn’t exist without it. Yet “everything has changed, and nothing has changed. Great storytelling is still key,” Daley said.

Students and professors at the school are trying to understand how the cinematic vocabulary is evolving in response to and in ways that can incorporate technological change. For example, does the concept of an edit or cut exist in a virtual world, and if it does, what does it look like?

Interactive gaming, virtual world building, social media, and smart building technology are among the emerging technologies being integrated into the curriculum as additional tools in the service of developing and telling stories. 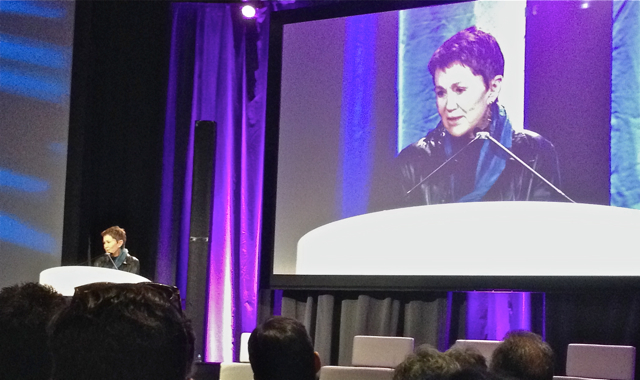 Dean Daley gave a number of examples of faculty initiatives to illustrate the point.

Professor Alex McDowell is heading up a virtual world building program within SCA. Through his work in feature films, including “Minority Report” and “Fight Club,” McDowell has developed the thesis that “a world is a container for the narrative.” He and his students are working with Intel researchers on “Leviathan,” a large world-building project based on the like-named young adult book series.

Professor Scott Fisher and his students are working with BMW to create enhanced driving experiences that seamlessly integrate with the passenger’s holistic mobile/wireless experience.

Professor Tracy Fullerton, who leads the Interactive Media & Games Division, is exploring innovative game play. For example, what does it mean to actually play? Educators often create games that fulfill lesson plans, but aren’t fun. Fullerton’s students are exploring the problem from the other side of the desk: What are ways to make something fun, and then how can education material be harmoniously integrated into those strategies?

Nonny de la Pena was commissioned by the Davos Economic Forum to develop “Project Syria: An Immersive Experience” — a virtual reality experience that places a ‘player’ in an Aleppo street just before a bomb goes off. The Davos attendees who tried this head mounted display experience had a variety of emotional responses — from screaming and crying to sitting down to protect themselves. Through the combination of very real audio and video that tracked with the player’s head and body motion, de la Pena was able to engage the player in the narrative on a deep emotional level.

“We are deeply interested in the dynamic interaction between technology and story,” said Dean Daley.

SCA also works to stay close to the issues that concern the industry. For example, the USC Entertainment Technology Center was founded by George Lucas in 1992 because the technology and entertainment industries were not talking to each other. Lucas saw this as a major problem, and he turned to the school to establish a platform for bridging the divide.

“Entertainment is a growth industry,” said Daley. All fields need to use storytelling in their work. People live in a world that is so permeated by media that we don’t always see it. Dean Daley encouraged the professional community to work together with SCA to take charge of our industry’s collective destiny.