Xavier is designed to process data from a vehicle’s radar, cameras, lidar and ultrasonic systems with a stunning increase in efficiency and a significantly smaller form factor than anything else on the market. 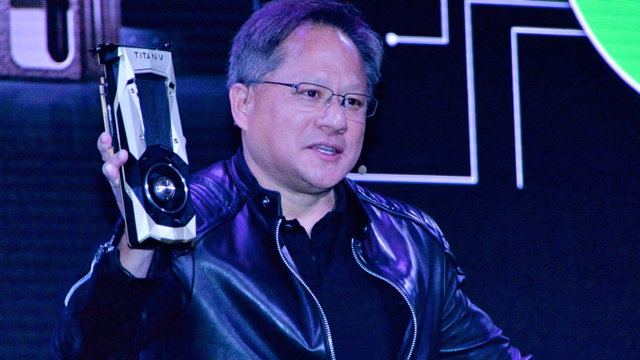 It sits at the center of Nvidia’s trio of automobile platforms covering every aspect of the next-generation automobile experience: Drive AV, which uses neural networks to enable cars to drive themselves; Drive AR, which fuses AI, computer vision and computer graphics to deliver information points, alerts and navigation aids in AR; and Drive IX, which gathers sensor data to enable AI assistants for drivers and passengers.

According to Huang, the SoC performs 30 trillion operations per second using only 30 watts of power, a mere 10 percent of the previous generation’s 300-watt requirement. “The more you buy the more you save,” the affable CEO joked numerous times.

Among the new relationships that Huang announced at CES’s opening press day were partnerships with Uber to bring Nvidia’s AI computing systems to the on-demand car company’s fleet of self-driving vehicles and with technology companies Baidu and ZF to build production-ready, AI autonomous driving platforms for China.

Volkswagen CEO Herbert Diess joined Huang on the stage to celebrate the German car manufacturer’s adoption of Drive IX as an AI co-pilot.

A slice of the evening was devoted to gaming, most notably to the launch of a 65-inch, 4K, 120Hz, HDR display with Nvidia’s advanced streaming technology dubbed BFGD (big format gaming display).

Also relevant to entertainment content creation was Nvidia’s partnership with Disney to train an AI to compose an orchestral piece like Academy Award-winner John Williams. “We laid John Williams’ style on top of a platform trained to compose like Bach and Beethoven,” Huang explained.