Capture and Share 3D Images with the Seene App for iPhone

A new app from London-based Obvious Engineering allows iPhone users to easily capture and share 3D images. Seene is compatible with Apple’s iPhone 4S and higher, and browsers such as Chrome, Firefox and Safari that support WebGL for 3D. It works by aiming your phone at a subject and moving around to record different angles. The progress is then overlaid on top of a video feed, resulting in a “seene” that builds automatically, which can be shared via social tools. 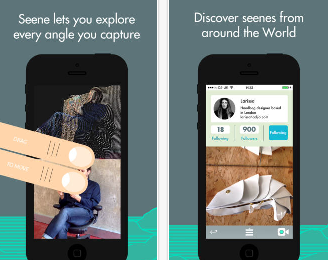 “See around your subject by rotating your phone in your hand,” explains the Seene site. “Share your seenes on Twitter or Facebook, and embed them in Tumblr and Web pages.”

“The science behind the app isn’t new, but is executed more effectively than in Seene’s predecessors,” suggests The Verge. “The app plots points on your subject, then uses parallax to determine its location in space when you move your phone around. Thus, the app can estimate the depth of an object based on how it’s distorted when you move your phone.”

In the iTunes Store, early adopters have complained of problems with the iPhone 5s. Obvious Engineering writes: “Version 1.0.2 has a bug that stops you taking seenes. We’ve already submitted a fix and are waiting for approval, please hold tight!”

“Seene works nicely in well-lit rooms and with detailed subjects, but if your surroundings and object of choice don’t fit the app’s narrow criteria, the results won’t be pretty,” explains The Verge in its review. “But, even with poorly done seenes, the app’s 3D effect is breathtaking since it uses the iPhone’s accelerometer to alter the perspective of the image accordingly when you move your hand. On the Web, moving your mouse on an image alters its perspective.”

The Verge suggests that shooting a seene may not be as simple as shooting a Vine video or Instagram photo, but is still impressive in terms of 3D, especially considering no special equipment is required.

“The computer vision field has too many lab demos and not enough cool, useful consumer products,” says Seene co-creator Andrew McPhee. “We wanted to create something that hundreds of millions of people could potentially use.”