App for Broadcasting Text Chats Rolls Out with ‘SummerBreak’

Avner Ronen, founder of consumer electronics startup Boxee, has rolled out Public, a messaging service that he calls “a third medium for broadcasting conversations.” Public, which raised $2 million at the end of 2015 and is available as an iPhone app and website, broadcasts group chats to an audience, complete with GIFs and emoji. A handful of active participants chat about a topic, which anyone can follow in real-time or read later. Chats can also be shared on Facebook, Twitter or Instagram or embedded in other websites.

Variety reports that one of Public’s first partners is Fullscreen, which will use it for a public chat with “SummerBreak” cast members to promote the latest season of the AT&T-sponsored reality show that follows high school students on their summer break. The show has also used Periscope, YouTube and Instagram. 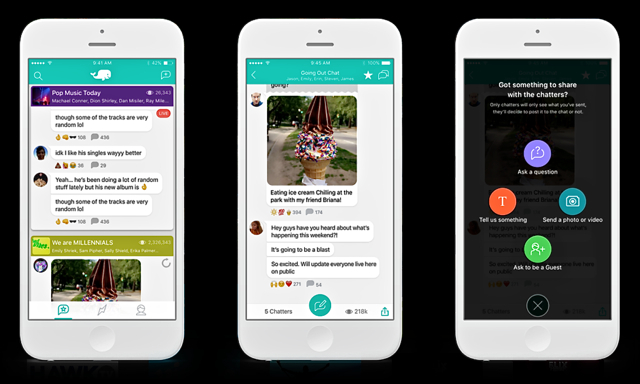 “It’s a perfect use case for Public,” said Ronen.

After Samsung acquired Boxee, Ronen was inspired to create Public when he saw how so many messaging apps were “looking to add more encryption and privacy safeguards in response to Edward Snowden’s revelations about government surveillance.”

“My contrarian instinct got me thinking: What would happen if someone would build the least secure messaging platform, where everything you say is public,” explains Ronen. “Hence the name.”

Variety notes that, although Public competes with Twitter, a platform often used by celebrities to speak to fans, it’s more challenging to have a long conversation on Twitter “because the back-and-forth can get lost in a maelstrom of unrelated tweets” and, because Twitter lets anyone join the conversation, the thread of conversation is lost.

On Public, however, only a few people speak and everyone else listens. Audience members can “still comment in a sidebar, ask questions and even ask to be invited to join as guest participants,” but Public organizers can delete comments and “anyone can block a user.”

“Hopefully this structure will provide for a safe, positive space where people can have meaningful conversations,” said Ronen. Two months ago, former Twitter executive Michael Sippy released group chat app Talkshow, but Ronen noted, “the real test will be whether consumers are actually ready to read chats much in the same way they have been consuming podcasts and late night TV talk.”