Amazon’s new AR addition to its iOS app, called “AR View,” allows customers the ability to visualize products in their own home. Thousands of products are viewable across a range of categories for both the office and home. By utilizing Apple’s ARKit, the experience unfolds in real-time, allowing the customer to rotate both the object and change its perspective. By introducing the new feature, Amazon joins other retailers such as Target and IKEA that have all recently introduced augmented shopping experiences to their mobile platforms.

“IKEA, Wayfair and Houzz have all launched AR shopping features,” notes Recode, “but none of them sport the U.S.’s most popular shopping app for iOS like Amazon does.”

AR View represents a major upgrade for Amazon’s AR shopping experience, which was previously limited to “shoppable stickers” that could be applied to a still photo. The feature was only available for a limited number of items, and was not dynamic. 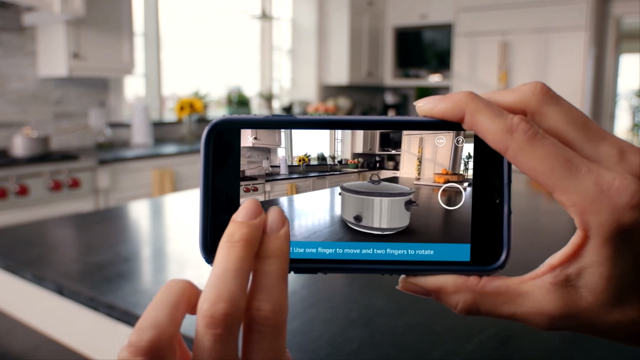 AR View differs significantly from Target’s AR solution, which is restricted to its mobile website. That feature, called “See It In Your Space,” does not use ARKit and is thus limited to static images.

By coupling an image with a rotatable and scalable 3D object, users are able to approximate the correct perspective that would allow the piece of furniture to appear in their space. Because Amazon’s AR view takes advantage of Apple’s ARKit, it will perform these calculations automatically.

TechCrunch reports that both Amazon and IKEA’s AR platforms contain thousands of items, while Target’s currently has only 200, with the promise of many more by 2018. The feature “uses WebGL technology to render the interactive graphics in the browser. In the future, the retailer may consider bringing this to other platforms, like desktop web and native mobile.”

To use the AR View feature, customers will tap on the camera icon in the Amazon app. This is the same camera that allows customers to scan barcodes or visual searches. By next selecting “AR View,” they can navigate through categories such as “living room,” “home décor,” “bedroom,” “kitchen,” “electronics,” and “toys and games.”

When the customer selects an object, it is overlaid onto a flat surface in their space. They are then able to walk around in a full 360-degree view.

It is currently uncertain how popular these platforms will be, though major retailers see promise in them as fewer people are visiting big-box retailers and prefer to shop online.