According to Piper Jaffray’s 26th semi-annual teen market research report, Twitter is now a more important social network than Facebook for many teens. The report suggests that 26 percent of teenagers call Twitter their most significant social media site, while 23 percent claim their most important site to be Facebook, down from a high of 42 percent. However, Twitter is not without competition; the photo-sharing site Instagram, for example, is also doing well amongst teens.

“Instagram has rocketed in popularity with teens. 23 percent said Facebook-owned Instagram was their No. 1 choice, up from 12 percent a year ago,” explains Business Insider. 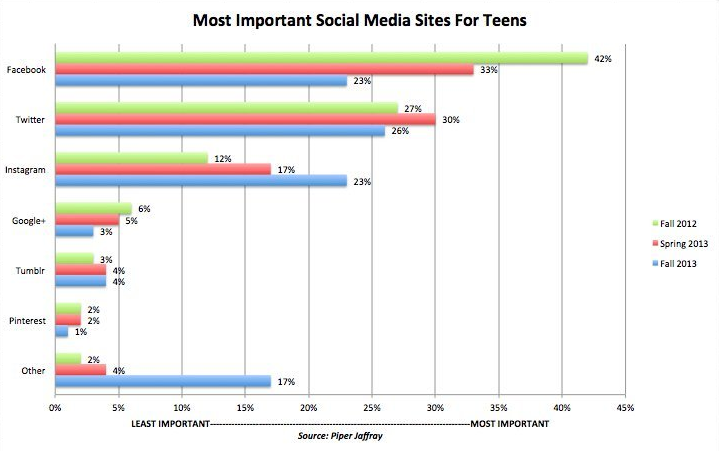 According to a Pew Report, one fourteen-year-old girl stated, “I got mine [Facebook account] around sixth grade. And I was really obsessed with it for a while. Then towards eighth grade, I kind of just — once you get into Twitter, if you make a Twitter and an Instagram, then you’ll just kind of forget about Facebook, is what I did.”

Facebook may have sensed this shift, and acted accordingly.

“The maneuvering suggests Facebook was right to acquire Instagram as a backstop against losing younger users to competing, simpler networks,” reports Business Insider.

However, Facebook holds a different opinion on their status with teen users. CEO Mark Zuckerberg has spoken publicly about Facebook, stating that “coolness is done for us.” He also has claimed that Facebook research does not indicate that teens are abandoning the site. However, Facebook has refused to share that research.

According to two sources within Facebook, there may be a disparity between what teens say about Facebook and how they actually use it. Although Facebook is “uncool,” attracting parents to utilize the social network as well, the use of the site amongst teens is widespread.

“Teens are shopping less in single brand, vertically integrated stores and more in multi-branded, multi-category and online retail environment,” notes the press release. “Approximately 78 percent of females and 82 percent of males shop online, and respondents indicated that a mid-teens percentage of their spending is online.”

“The shift toward digital is proliferating softlines, hardlines and media purchases. DVD by mail and streaming account for 52 percent of movie rentals and online music provider Pandora accounts for 25 percent of preferred music sources,” explains the release.