Constructed as a way for high school students to get to know their classmates, Facebook’s new Lifestage is a standalone iOS app, aimed at people 21 and under. The user answers a series of biographical questions by shooting video rather than writing text, and Lifestage turns the clips into a video profile that others can watch. Users, who can swipe to block and/or report sketchy visitors, do not need a Facebook account but instead select their high school to see video profiles of classmates.

TechCrunch reports that those 22 and older can download Lifestage, but only watch their own video profiles. For all other users, Lifestage only shows video profiles once 20 people from the same high school are using it, mimicking “the way Facebook was originally launched … because social apps are no fun if you don’t know anyone using them.” 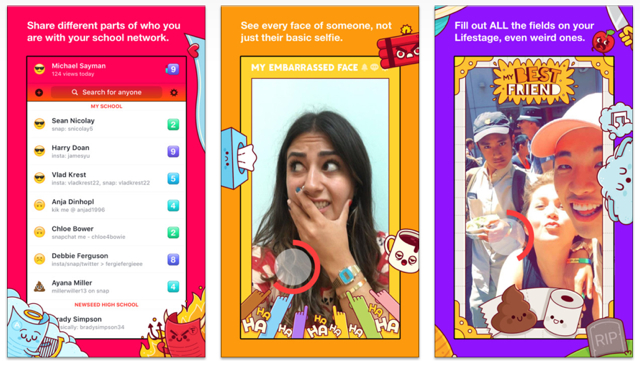 Lifestage is the brainchild of 19-year old prodigy Michael Sayman, who studied Facebook from 2004, when the site opened to the user’s profile, not the News Feed.

Similarly, with Lifestage, the user sees “a bunch of bio questions you can answer with videos,” and answering questions reveals still more questions. The feed shows profiles of classmates that are recently updated; the user can “tap through to see specific answers, or swipe through to skip to different sections.”

The more users add to their profile, the more highly they are ranked. To encourage frequent updating, a profile that hasn’t been updated for a while will show a frown or poop emoji, whereas a recently updated one will show a sunglasses smile.

Lifestage is not a messaging app (Sayman says “my friends and I have a bajillion messaging apps we already use and love, so what’s the point of having another messaging app? It just seems annoying to me.”), but users have a “Reach Me” line under their names that can be filled in with Snapchat or Instagram handles or other contact information.

Will this help retain Facebook users at risk of migrating to Snapchat? “I think of [Snapchat] like really great competition,” said Sayman. “They’ve got a great product and there’s a lot to learn … about how people have started to evolve the video space.”

A bigger concern is that Facebook has “a poor track record with standalone apps,” having shut down several, including Poke, Slingshot, Paper and Notify.” TechCrunch believes that “Lifestage could teach Facebook how to improve its profiles with video,” which founder Mark Zuckerberg has stressed as being the feature “at the heart of all our apps and services.”

Videos on Lifestage, it adds, are “totally unique videos that truly tell the story of who you are,” and might just “make Facebook seem fresh.”