Super Bowl 2017: Still an OTA Event, With Uptick in Streaming

Although streaming video has become increasingly popular, the Super Bowl still draws most fans to an over-the-air broadcast. That’s been true in the past and is still true for 2017, for what is expected to be the biggest TV event of 2017. Despite streaming options for the Super Bowl, on February 5, only 16 percent of U.S. viewers will watch the New England Patriots play the Atlanta Falcons this way, according to a survey commissioned by advertising company MGID. Those fans that wish to stream the game can access it through Fox Sports. 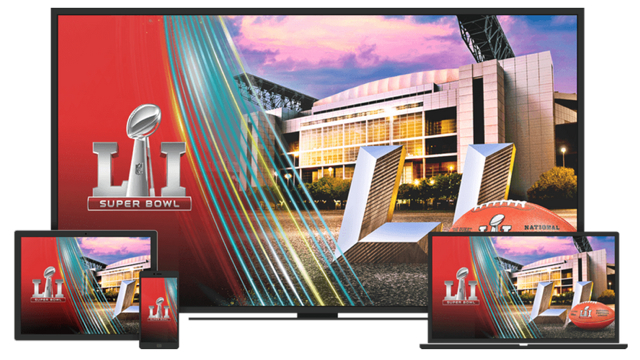 Although 16 percent is still a small number of viewers who plan to stream the game, it’s a “significant increase from past years.” Last year’s Super Bowl drew a TV audience of about 111.9 million, of which, says CBS, live-streaming averaged 1.4 million viewers. Popularity of streaming as an option for watching the game breaks down by age, with about 23 percent of millennials planning to stream via apps or online, versus 13 percent of older viewers.

With regard to watching the game at home on TV, 77 percent of the general population plans to do so versus 57 percent of millennials.

The survey also found that 43 percent of respondents are “likely or very likely” to rewatch their favorite Super Bowl commercials online, and 6 percent say a Super Bowl spot has “positively changed their perception of a brand.”

CNET reports on how viewers can stream the Super Bowl game for free if so desired. Fox will live-stream the game on its FOX Sports GO site and mobile app which a viewer can access for free, without needing to prove she is a cable or TV subscriber. The app works with iOS, Android, Windows and Amazon tablets and set-top devices Amazon Fire, Android TV, Apple TV, Chromecast, Roku and Xbox One.

Fox is also going to integrate local ads into the stream, thus offering “the same or a similar mix of ads as the TV broadcast.” Fans can also enjoy the new 360-degree “Be the Player” replays of big plays from Intel. But Verizon Wireless subscribers alone will also be able to stream the game on the NFL Mobile app, although it will eat up a lot of data without a Wi-Fi connection.