Neurable, a Boston-based startup founded by engineer/neuroscientist Ramses Alcaide, is showing a prototype of a game, with the working title “Awakening,” that allows users to break out of a virtual room by issuing mental commands. The prototype, said to be a few years away from commercial introduction, includes an HTC virtual reality headset and seven sensors that read brainwaves. The user selects objects by looking in the general direction of the object she wishes to select, thus narrowing the number of items to be considered.

The New York Times reports that, “the prototype is among the earliest fruits of a widespread effort to embrace technology that was once science fiction.” 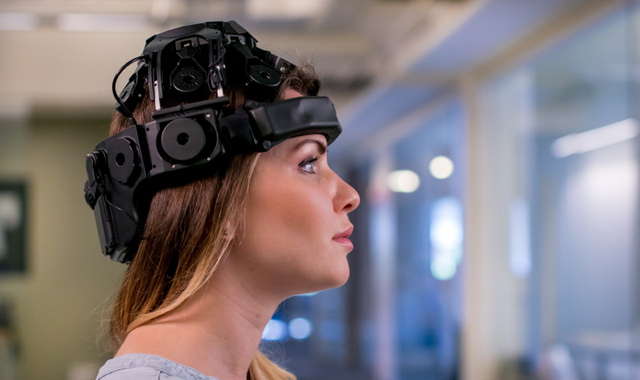 The Neurable prototype relies on a technology that has existed for decades: EEG (electroencephalography), “a means of measuring electrical brain activity.” Sensors that read brainwaves typically have a difficult time separating signal from noise, but Alcaide used algorithms based on research he did as a doctoral student at University of Michigan. His algorithms “read activity with a speed and accuracy that is not usually possible,” because they “learn from your behavior.”

The user has to train the algorithms by focusing on a pulse of light and, “each time it hits a small colored ball in front of you, you think about the ball.” When the user focuses on the light, “it stimulates your brain, the system reads the electrical spikes of your brain activity.” Thus, when the light hits the item the user is thinking about, “the system can identify the increase in brain activity.”

Due to the sensors’ limits, “an EEG-based game is unlikely to do more than slowly and simply select digital objects,” but Facebook is an example of one of several companies trying to do more, in this case “exploring methods for optically reading brain activity from outside the skull” via shining light into the brain to “directly read chemical changes.”

Facebook’s Regina Dugan said that, “in a few years … Facebook hopes to have a system that allows people to type with their thoughts five times faster than they now type using a smartphone keyboard.”