Sony is getting ready to launch its new 65-inch curved screen HDTV. While LG and Samsung introduced curved OLED HDTVs this summer ($10,000 and $9,000 respectively), Sony’s $4,000 display is the first curved LED HDTV featuring contrast-enhancing LED backlighting. According to Sony, the new TV produces richer 3D video and has a wider viewing angle with a curvature designed to make the viewing experience seem more natural.

“Your brain has to do less work and it’s more comfortable to watch,” says Sony TV training manager Philip Jones. “A lot of times people see the curve and think it’s a gimmick,” he notes. “But this TV is designed to be more immersive.” 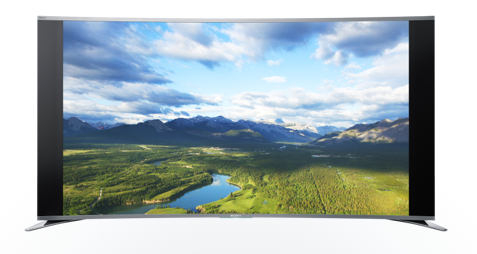 Consumers in retail stores are reportedly drawn to the curved sets released so far. “It feels like you are in the center of the action,” explains Richard Doherty, director of tech consulting firm The Envisioneering Group.

The immersive experience Sony promises for visuals will also extend into audio, with a multi-angle surround sound array of eight speakers.

“The consumer is hungry and has an appetite for these new technologies,” suggests Tom Campbell of the Video & Audio Center in Santa Monica, which began selling the Sony set this week. “Not everyone is coming to buy but they are coming to see (new products). They are very curious.”

Campbell believes the selling point of the curved set is that “you get depth like never before.”

The Sony S990 Curved LED HDTV is available for pre-order on the Sony Store. The TV is expected to ship later this month.