Viacom announced the results of a new study last week that examines the relationship between television and related social media habits. The study surveyed 5,000 viewers, ages 13-49 (in the U.S., U.K. Brazil, Germany and Russia) who weekly use at least two or more social media platforms. “When Networks Network: TV Gets Social” uncovered three key areas that lead viewers to engage in TV-related social media: Functional, Communal and Playful.

According to the press release: “Viewers engage in an average of 10 TV-related activities on social media platforms on a weekly basis, including: interacting with friends and fans (72 percent); following/liking a TV show (57 percent); sharing or recommending (61 percent); watching full clips and trailers (61 percent); searching for info and show schedules (66 percent); and gaming or signing up for freebies (49 percent).” 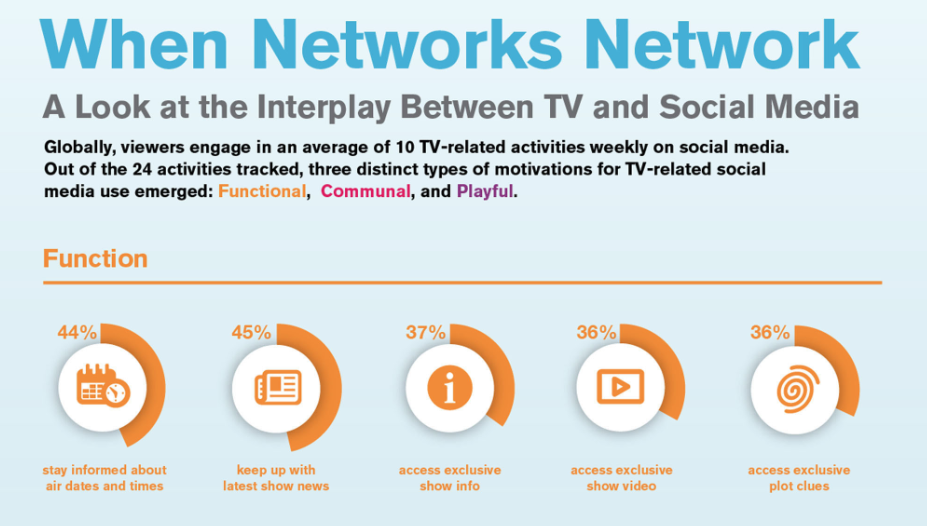 “Our objective with this research was not only to understand what drives our audiences to social media, but also to see how their social media activity impacts viewing behaviors,” said Colleen Fahey Rush, executive VP and chief research officer for Viacom Media Networks.

In the Functional category, 45 percent use social media sites to keep up with the latest show news, 44 percent access social media to stay informed about air dates and times, while 37 percent use it to access exclusive show info and 36 percent are watching video. The study showed that functional motives are stronger for teens and young adults. 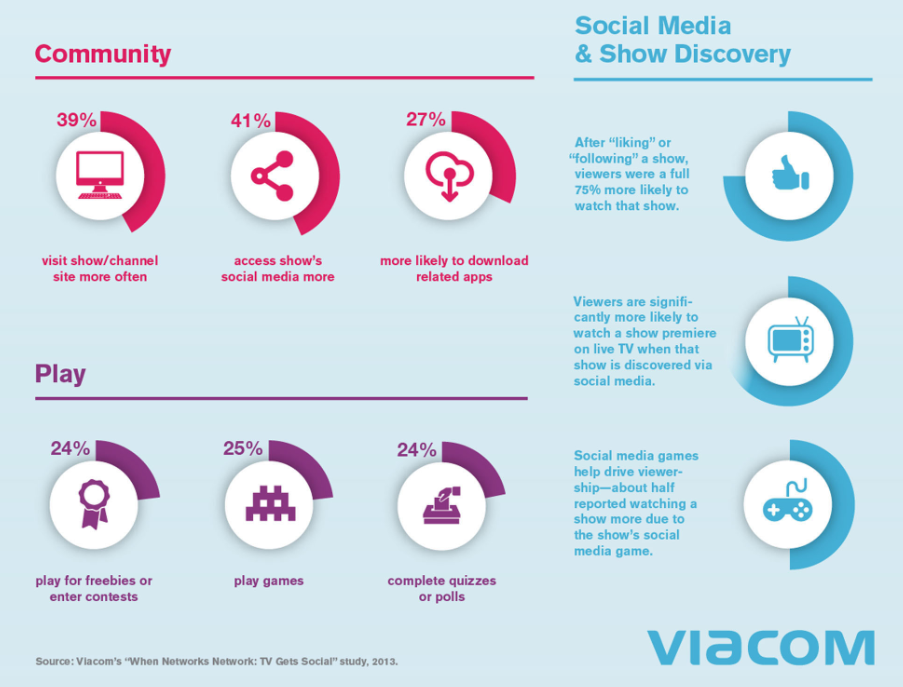 “We found it intriguing that TV-related social media behaviors and motivating factors were consistent across all five countries that we looked at in this study,” said Christian Kurz, VP of Research, Insights and Reporting for Viacom International Media Networks. “Globally, social media is becoming today’s version of a TV guide for viewers — it is really how they prefer to get their information about the shows they watch.”

While social media ranked third as a leading resource for show discovery (behind promos and word-of-mouth), 70 percent say they are likely to watch the live debut of a show discovered via social media, compared to 48 percent if discovered elsewhere.

In the Playful category, the study determined that social TV games also have an impact. “Social media games help drive viewership, with around 30 percent of respondents having gamed before ever watching a show,” notes the release. “About half reported watching a show more due to the show’s social media game. Game shows, comedy and reality shows come in as the top genres for gaming.”