Messaging has become increasingly confusing, as users pick among Instagram, iMessage, Skype, Snapchat, Twitter and Google’s Hangouts and Allo — not to forget the basic but limited SMS. Notifications pile up and search becomes difficult if not impossible. According to Wired, all that confusion would disappear if users would simply pick a single app, Signal, which is free, has strong encryption and works on every mobile platform. Signal’s developers say they won’t add emojis, ads, stickers or web-tracking, to keep it simple to use and speedy.

Wired reports that, “Signal looks and works a lot like other basic messaging apps, so it’s easy to get started,” and it also supports voice and video calls. Similar to iMessage and WhatsApp, “Signal lets you sidestep expensive international SMS fees.” 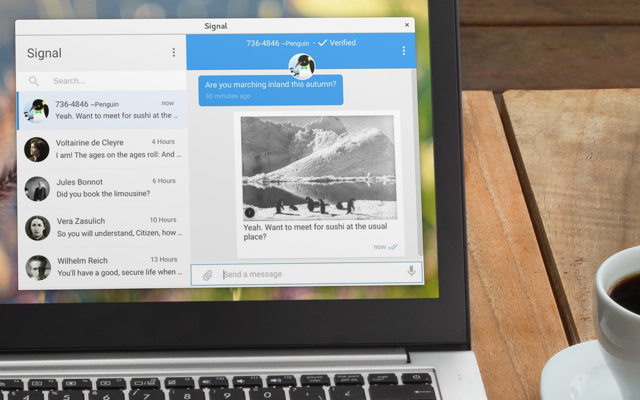 What differentiates Signal from other messaging apps is that, “as long as both parties are using the app to message each other, every single message sent with Signal is encrypted.” The encryption is extra-strong because, as an open-source license, “experts have had the chance to test and poke the app to make sure it stays as secure as what’s intended.”

With Signal, the user can also “force individual conversations to delete themselves after a designated amount of time.” Further, all voice calls are encrypted.

Signal sounds similar to WhatsApp, which already has over a billion users and most of Signal’s features. But, points out Wired, WhatsApp is “owned by Facebook, a company whose primary interest is in collecting information about you to sell you ads.”

Although WhatsApp uses Signal’s encryption, Facebook “can still extract metadata from your habits, like who you’re talking to and how frequently.” WhatsApp is, however, “the next-best option to Signal,” with equally strong encryption and an ease of use due to its massive install base.

Not so for Facebook’s Messenger, which requires users to “encrypt conversations individually by flipping on the ‘Secret Conversations’ option.” Anyone with a Facebook profile can also send you a message. Apple’s iMessage exists in an iOS walled garden, which makes it less useful.

Although many users are accustomed to the features of specific messaging programs, their increasing concerns about privacy may lead them to switch from whatever they use now to Signal, which can also be set as the phone’s default SMS client.