Disney Research has created a haptic, or touch feedback, system that uses bursts of air. The AIREAL system simulates touch, or tactile sensation, in three-dimensional empty space. The haptic feedback can be applied to countless applications and situations, and may offer new ways for users to interact with their devices. The concept is to make touchless experiences, such as motion and gesture control, a physical interaction. This will ultimately give the user a more natural, touch-like perception. 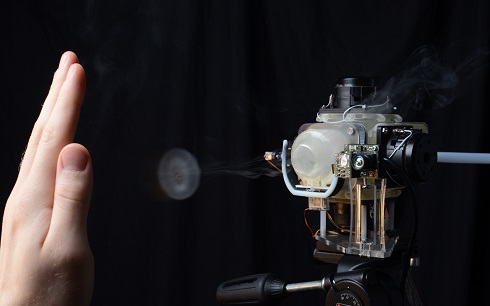 The system uses 3D-printed components along with five actuators and a group of sensors to create bursts of pressurized air vortices to produce the touch feedback feeling. Once the jets of air come in contact with the user, it forms a feeling of touch.

The system can be used for controlling and interacting with video games, but it can also applied to many other areas. AIREAL can be used to interact with virtual reality or environments in new ways, or create gesture feedback to motion controlled devices.

“Like most of the lab’s experiments this has been in the works for a while,” notes Engadget. “And the chances of it being used outside of Disneyworld anytime soon are probably slim.”

The Engadget post includes a video demo. AIREAL will be on display at the SIGGRAPH Conference in Anaheim this week.

The Disney Research team will also demo a 3D modeling system at SIGGRAPH. The group has developed an algorithm that can generate high-end 3D computer models from basic 2D images, which it says could help serve video game producers and filmmakers.

“Unlike other systems, the algorithm calculates depth for every pixel, proving most effective at the edges of objects,” reports Gizmag (also includes video demo). “The algorithm demands less of computer hardware than would ordinarily be the case when constructing 3D models from high-res images, in part because it does not require all of the input data to be held in memory at once.”