Canon has been demonstrating a handheld version of its MREAL Mixed Reality technology at SIGGRAPH this week. According to Canon, the technology merges virtual objects with the real world, at full scale in three dimensions. The company launched its MREAL Mixed Reality headset earlier this year. The handheld version functions similarly to the headset, by enabling the use of markers or sensors to render images in real space. 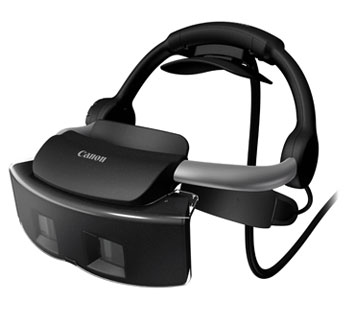 “The MREAL System provides an interactive and immersive experience that benefits collaboration in a variety of industries,” notes the press release. “The combination of the real world and CGI makes pre-visualization of a pre-production scene possible in filmmaking.”

“It can also be used to help drive the research and development and overall product lifecycle management of products in the manufacturing space, as designs can be examined, modified, manipulated, analyzed and presented with a level of realism that allows complicated ideas and plans to come to fruition quickly.”

“Something you’ll want to keep in mind: this is still an enterprised-focused device,” explains Engadget. “That said, it doesn’t make the tech demo and usage scenarios any less cool to gawk at. The demonstration we saw here in Anaheim involved a Kabuki dancer out in the center of the demo area. Details like shadows and wrinkles in the performer’s clothes were rendered in real time — just as if a real person were performing. A collection of sensors mounted around the top of the demo stage allowed us to look around the space while the projected image reacted to our position. Not once did we lose sight of the action.”

Canon plans to commercialize the MREAL handheld display (HHD) at the end of 2013. Currently under development, the company envisions HHD applications for showrooms, exhibitions and meeting presentations.

Engadget noted two additional demos: “First, a boat motor was projected in real space using augmented reality markers, allowing the user to inspect a scale model of the engine for training or other purposes. The ability to deconstruct the engine and see how different portions of it worked was all available to the user. Next, we saw a set of markers wrapping a rectangle projected a model of a Canon DSLR housing. Both of these scenarios offer a more in-depth look at 3D models before the prototyping phase or any steps are taken towards production.”