Nvidia offered a sneak peek at its next-generation mobile processor, Project Logan, during the SIGRRAPH Conference in Anaheim this week. Logan is based on Nvidia’s advanced Kepler graphics architecture used for desktop and laptop chips. Nvidia plans to launch Logan next year, and combine its mobile phone and desktop 3D graphics architectures. This will enable new mobile applications such as augmented reality, computer vision and speech recognition. 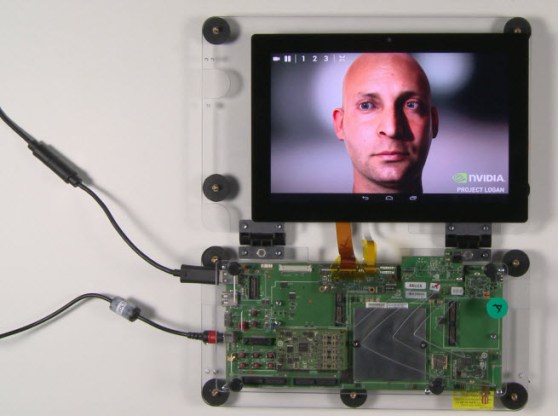 “To date, Nvidia’s Tegra mobile processor-graphics chips have used a different architecture,” reports GamesBeat. “But starting with Logan, the mobile processors will also use the power-efficient Kepler designs.”

The company demonstrated the Kepler technology with a computer-generated human face called “Ira,” which was generated in real-time (pictured here). “The Nvidia demo is one of the closest things to realism that you’ll find,” notes the article. Project Logan could lead to the ability to animate Ira’s face on a mobile device.

“I think this is the biggest breakthrough in graphics since we introduced the GeForce 256 (graphics chip) 14 years ago,” said Dan Vivoli, senior vice president of corporate and strategic marketing at Nvidia. “But this is 400 times more powerful than the original GeForce. This is the most efficient mobile processor ever designed.”

“It is, in fact, 140 times more powerful than the first Cray supercomputer, or 1.6 times more powerful than a PlayStation 3,” explains the article. “Vivoli said that the mobile version of Kepler will advance mobile computing by more than seven years, based on what is in the market today. With 192 graphics cores, or processors, Logan has several times more processors than the fastest Tegra 4 mobile chip that the company currently makes. But the number of cores is less than half of what Nvidia has on its laptop chips. Like Tegra, Logan will come with its own ARM-based processor attached to the graphics.”

The company claims that Logan will deliver hyper-realistic graphics on a mere two to three watts of power, making it ideal for tablets and smartphones. Vivoli explains that performance per watt will be up to three times better than that of an Apple iPad 4.

Kepler-based products and Logan feature numerous graphics cores, including tessellation that creates geometric shapes dynamically and efficiently. “It can also do anti-aliasing and post-processing algorithms, which can make 3D images look smooth and movie-like,” notes the article. “And it can handle physics and simulations tasks that are normally handled by microprocessors. That will enable Logan to handle tasks such as computational imaging, computer vision, augmented reality, and speech recognition.”

Nvidia ships its first version of the Shield mobile handheld gaming device next week for $299. It would not be surprising if the device uses Project Logan technology in the future.

The GamesBeat post includes some video demos. You can read more about Project Logan on the Nvidia blog.

Related Story and Video from SIGGRAPH:
Christie and Nvidia Team Up for an Interactive Car-Buying Experience Powered by Augmented Reality, Engadget, 7/24/13