While most consumers may currently think of gaming or video when they hear “augmented reality,” retailers are experimenting with a new batch of AR apps that leverage mixed reality tech. For example, Amazon’s Product Preview lets shoppers visualize different TV sizes and brands in their homes, Lowe’s Vision accepts measurements to map out placement of kitchen appliances, and WayfairView helps consumers place new sofas and cabinets with their existing furniture. Gap plans to launch DressingRoom on Google Play at the end of the month, providing users with the ability to dress virtual mannequins with different clothing options.

“These apps don’t run on iPhones … or any other standard smartphone,” explains The Wall Street Journal. “They rely on a depth-sensing, motion-tracking camera system called Tango, developed by Alphabet Inc.’s Google.” (Below is a photo of Lowe’s Vision in action.) 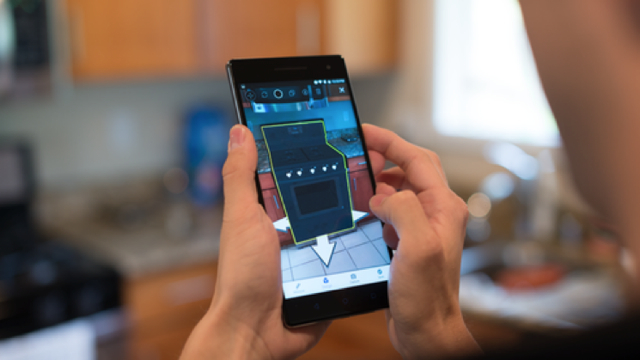 Currently, Lenovo’s Phab 2 Pro is the only Tango-equipped phone available, but Asus will roll out ZenFone AR later this year and Google says more Tango phones are on the way.

“Tango uses three cameras to determine the size of the room you are standing in, and where people and furniture are around you,” explains WSJ. “While the technology isn’t yet good enough to guide a blind person (not that Google hasn’t tried), Tango can already scan a human being’s body to create a 3D avatar, said Ari Bloom, chief executive of Avametric, the startup that built the Gap app.” 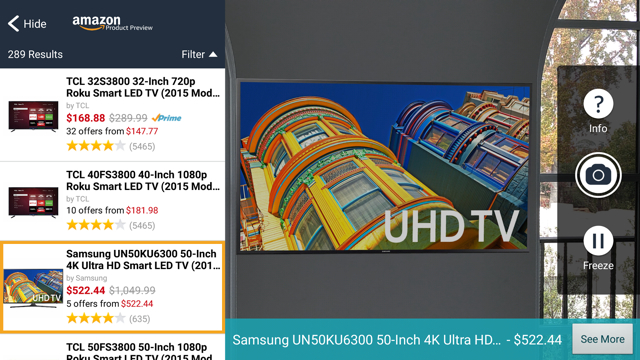 You can visit the Google Play Store for more information on Amazon Product Preview (pictured above), Lowe’s Vision and WayfairView.

“Retail, especially fashion, isn’t usually an early adopter when it comes to tech,” said Gap exec Gil Krakowsky. “This is a bit of a bet on AR. We think AR will be big in the future, and on lots of phones at some point, and we want to be there for our customers, rather than playing catch-up later.”