Variety reports that, “low-end headsets like Samsung Gear VR and Google Cardboard and Daydream don’t offer any positional tracking at all,” which means that “users can look around in a VR space, but not change their point of view.” The result is “cognitive dissonance” because “the VR game or app can’t translate the movement into an accurate change of position.” 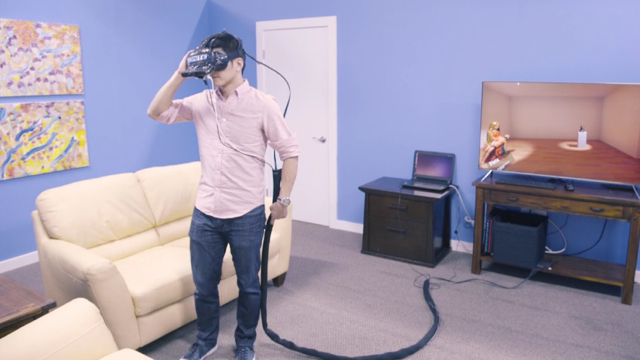 The higher-end headsets — Oculus Rift and HTC Vive — do offer positional tracking devices based on infrared and lasers, “a kind of external camera setup for tracking.”

But there are downsides to external trackers, which is why Eonite Perception makes the effort to avoid them, by integrating a depth sensor into the headset. Helmy reports that the challenges to overcome in creating such a system include cost, latency and “the ability to detect even the smallest movements.”

“The accuracy has to be sub-millimeter,” he said. The company claims it has met those challenges, and a Variety reporter that tried out the Eonite Vantage headset to walk through a virtual room called the demonstration “impressive.”

The demo proved the headset could accurately track movements and positional changes, although “some viewing angles made the sensor fail outright.” Helmy said that, “commercial solutions will be able to overcome any shortcomings of the prototype” and announced that an unnamed manufacturer will integrate the technology into a “new stationary VR headset” in the coming months.

It will allow users to “scan their living room in less than 60 seconds, but also continuously update its internal mapping so users won’t accidentally step on their cat when it walks in the room while they use the headset.”