Is it time to come up with new language to address second screens? According to digital analytics firm Flurry, consumers spend an average of 2 hours and 57 minutes on their smartphones and tablets each day. Since the Bureau of Labor Statistics estimates that viewers spend 2 hours and 48 minutes per day watching television, the Flurry numbers would suggest mobile devices are becoming the new first screen. Flurry also notes that time spent with apps has increased nearly 10 percent in the last three quarters.

“The mobile device emerges as an even bigger winner when you filter the data for dedicated users,” reports Businessweek. “Flurry clocks daily mobile device users at 3 hours and 45 minutes per day, compared with 3½ hours for daily television watchers.” 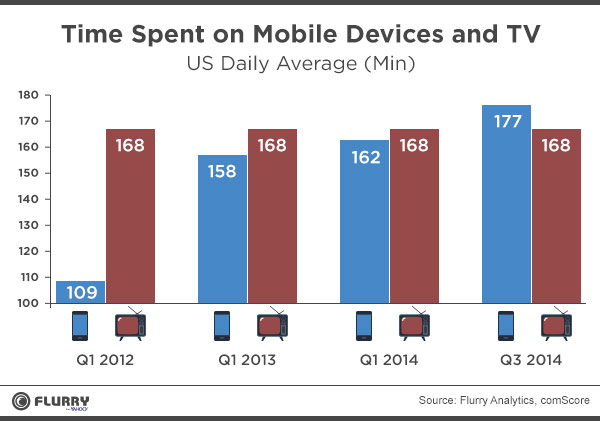 In her annual Internet Trends report, Mary Meeker pointed out in May that more time spent on mobile devices should lead to eventual change in approaches to advertising.

“Meeker thinks that mobile and Internet advertising have about $30 billion worth of growth to come just from the reallocation of ad dollars to account for changing media habits,” explains the article.

Meanwhile, cable TV networks are already experiencing a slowdown with their advertising businesses.

“In reality, it’s not quite as simple as matching the ad dollars to the amount of time spent,” suggests Businessweek. “Digital advertisers tend to look for immediate transactions. This is the whole point of Google’s search ads: Suitsupply wants its ad to show up at the exact moment someone starts searching for new clothing. But companies still see television as the place for brand marketing.”

Earlier this week, we reported that the latest Ericsson Mobility Report estimates that 90 percent of all people over the age of six will own a mobile phone by 2020.