Viacom and Amazon announced a multiyear deal earlier this week that will provide Amazon with exclusive rights to Nickelodeon and Nick Jr. shows aimed at children and preschoolers. The agreement, estimated to be worth several hundred million dollars, also includes content from Viacom networks MTV and Comedy Central. The deal with Amazon was inked after Netflix and Viacom failed to renew their licensing agreement.

Amazon’s biggest streaming deal to-date “signals that the heated battle for online rights has increasingly moved to television’s youngest viewers,” suggests The New York Times. “In April, Netflix said it would allow its deal with Viacom to expire. Then last month Netflix struck a deal with the Walt Disney Company to gain exclusive rights to stream Disney Jr. series like ‘Jake and the Never Land Pirates’ and Disney XD’s ‘Tron: Uprising.’ In 2011, Netflix introduced its ‘Just for Kids’ menu with a selection of shows and movies aimed at children, or parents looking to entertain them.” 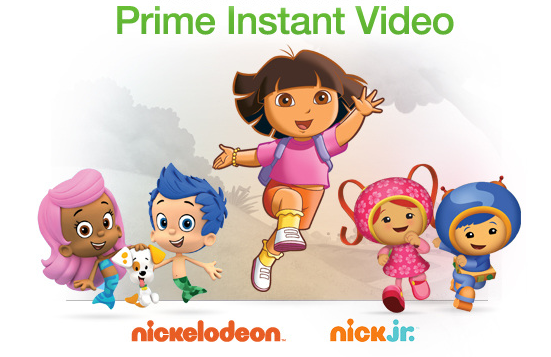 These moves put pressure on Amazon to include children’s programming for its Amazon Prime service, which is attempting to compete with Netflix and Hulu. The deal with Viacom will provide Amazon Prime users with past seasons of popular children’s shows including “Blue’s Clues” and “Dora the Explorer” and future episodes of “SpongeBob SquarePants.”

“Amazon has a smaller streaming audience than Netflix, but for Viacom the arrangement presents the opportunity to have tie-ins with the consumer products that Amazon sells, like DVDs, ‘Dora’ backpacks and ‘SpongeBob SquarePants’ beach towels,” explains NYT.

Amazon has also secured the rights to stream popular Comedy Central and MTV shows, including episodes of “Jersey Shore,” “Awkward,” “Tosh.O” and “Teen Mom 2.” But it is children’s programming that has become “one of the most-watched TV genres on Prime Instant Video,” notes Bill Carr, Amazon’s VP of digital video and music.

In total, the deal provides Prime Instant Video with more than 3,900 episodes from Nickelodeon, Nick Jr., MTV and Comedy Central.

“We have increased by 55 percent the number of episodes available to top Prime shows for kids,” wrote Amazon CEO Jeff Bezos in a letter to customers. The deal added “400 episodes of new shows like ‘Team Umizoomi,’ ‘Bubble Guppies,’ ‘Victorious,’ ‘Big Time Rush’ and ‘Drake & Josh.'”

“Viacom’s deal with Amazon shows how media companies are trying to adapt to the shifting dynamics of the online video world,” suggests The Wall Street Journal. “Digital licensing is a fast-growing source of revenue for Viacom and other content owners, but the negotiation dance has become more complicated.”

“As a result, media companies are banking on Amazon and other emerging buyers of digital content to bid for their programming and maintain momentum in digital licensing revenues,” explains WSJ. The potential buyers currently include Netflix, Hulu, Amazon, Redbox Instant, and Intel, which is developing a cable TV-like service for the Internet.

“Cable operators also could become significant bidders as they purchase more content for ‘TV Everywhere,’ an industry term for services through which pay TV subscribers can get shows on computers and mobile devices,” adds WSJ.