Instagram Users Can Feature Popular Music in Their Stories

Instagram Stories, which currently touts 400 million daily users, now offers a new feature that enables users to add clips of popular songs to their photos and videos. The feature is initially available to Android and iOS users in six countries (including the U.S.), with plans to roll out to additional regions soon. Facebook’s recent deals with major and indie music labels will enable Instagram users to select up to 15 seconds of music from the likes of Bruno Mars, Cardi B, Demi Lovato and Maroon 5 to create soundtracks for each post.

In addition to the U.S., the new feature is available today in Australia, France, Germany, New Zealand, Sweden and the United Kingdom. 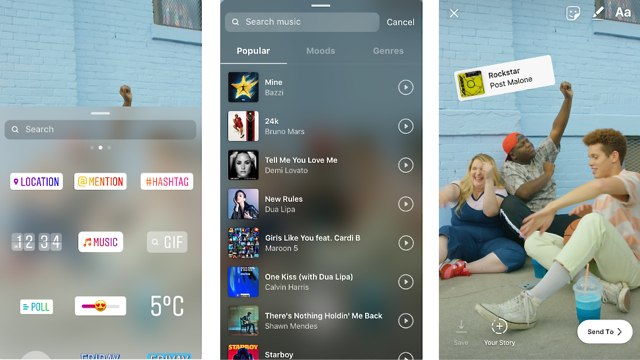 “The launch could make Instagram Stories more fun to post and watch in a way that copyrights won’t allow on Snapchat, while giving the app a way to compete with tween favorite Musical.ly,” notes TechCrunch.

The Instagram app recently reached the 1 billion monthly user milestone, and Instagram Stories now has 400 million daily users, up from 250 million users one year ago.

Users can “search for a specific song or artist, or browse by mood, genre or what’s popular.” Special song stickers will provide access to artist and song title information.

While “musicians and rights holders will be compensated for the use of their songs,” Instagram has yet to “specify how those payments would work. Facebook secured deals with all the major record labels and many independents to pave the way for this feature.”