Facebook Live, a pet project of chief executive Mark Zuckerberg and one of the company’s top priorities, is getting a big push. Posting video there now requires a Facebook app on a mobile device, but the Silicon Valley company also plans to introduce new features and partners in early April and at F8, Facebook’s developer conference. Facebook is also gaining traction with getting media companies and celebrities to participate, most recently on the “Today” show, which launched a Facebook Live video-streaming booth.

“This feels like a transformative step,” said The Huffington Post executive editor Liz Heron, whose company just begun aiming its video production for social media distribution, a switch from streaming live video through its website since 2012. 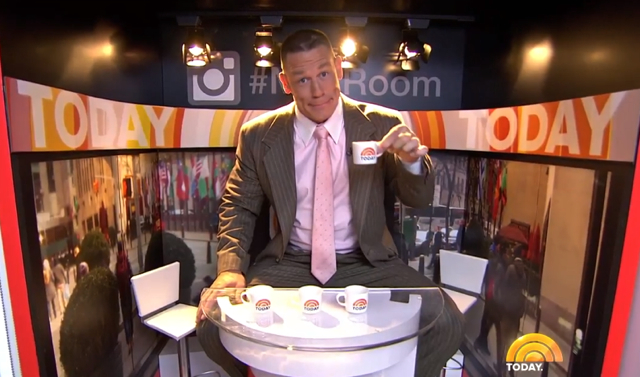 Facebook Live is the company’s move to become a venue for television and live events, rather than a place that fans can talk about them. The most recent coup is nabbing the “Today” show, whose Facebook page has 5.1 million followers, reports Variety. Facebook paid for the installation of both the “Today” booth and an Instagram “Mini Room” (above), with a “replica of the ‘Today’ anchor desk scaled to less than half the actual size, which will let guests upload photos to the @TODAYshow account.”

With the Facebook Live and Instagram booths, built by Laguna Hills, CA-based FoxTales, “Today” can create more content around guests who choose to appear, with the aim of “driving fans to click over to Today.com or tune in to NBC.”

“The goal is to pull back the curtain between us and our social audience,” said executive producer of digital Ashley Parrish. “Our guests can go in and talk directly to our Facebook audience… This is an opportunity to create digital-exclusive content with celebrities.” “Today” plans to promote the booths via on-air teasers, and eventually “highlight the Facebook Live green-room feed in the telecast.”

Other high-profile media uses of Facebook Live include Disney, which did a Q&A with Johnny Depp and director James Bobin for “Alice Through the Looking Glass,” and Jennifer Garner who answered fan questions about her new movie, “Miracles From Heaven.”

Some media companies, however, are cautious about “getting tied so closely to yet another Facebook product,” says NYT, mainly because they want to figure out the financial arrangement for viewed videos streams. Advertising, subscriptions or paid one-time events could be sources of revenue from live streaming, but Facebook is vague on details, instead “pushing a build-first, make-money-later philosophy,” that media partners can find frustrating.

Facebook is, however, thinking about letting its media partners use their own studio recording equipment to broadcast live video, say two people with knowledge of the plans, which would “introduce a more polished, professional set of live programming to Facebook’s audiences.”