The Dish HopperGO, originally announced at CES, is now shipping, and early reviews deem it a good device for specific uses. About half the size of a smartphone, the tiny device is basically a 64GB USB drive with built-in wireless access that connects to the user’s Dish Hopper 3 or Hopper 2 and offers a capacity of up to 100 hours of TV. The user can unplug the device and then watch four hours on one charge through the Dish Anywhere app. The device’s interface consists of an “on” button and a USB port.

According to TechCrunch, “the real magic happens on the Hopper and in the Dish Anywhere app,” comparing the HopperGO to Wi-Fi “media drives” used to stream video and images to mobile devices. The user moves video to the device by selecting and transferring it, “then, when you are connected to the HopperGO via private Wi-Fi, you can watch up to 100 hours of TV.” 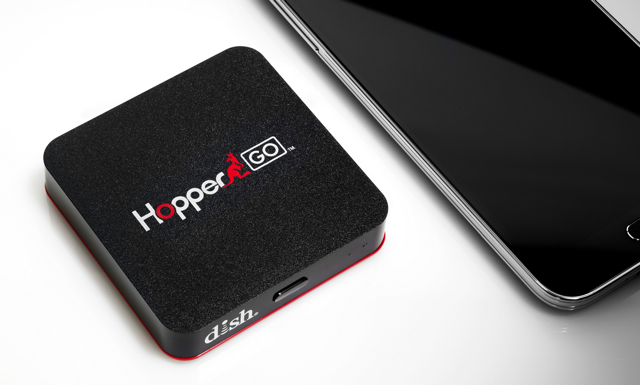 TechCrunch surmises that early adopters will be parents who “want to take a few hours of Dora to the ski lodge without Internet connectivity.” However, given the specialized nature of HopperGO, the near-ubiquity of Internet around the world and the ability to simply stream from a connected Hopper device via Dish, HopperGO won’t have many use cases. Although, at $99, it might be “a fun addition for an on-the-go family” or a TV fan who might find himself somewhere without Wi-Fi.

PC Magazine says HopperGO is “pricey for what is basically 64GB of portable storage,” also pointing out the device’s short battery life and “inconsistent copy protection measures.” It also notes that Dish doesn’t release the technical details of video transferred to HopperGO, which means that the effective resolution of such recordings are unknown.

With regard to copy protection, users will experience “the same limitations… when copying a recording to your smartphone or tablet.” HopperGO does support simultaneous playback on up to five mobile devices, notes PC Magazine, which concludes that the device can “come in handy… if you have limited storage space and can’t count on a good Internet connection at all times.”