The 117-slide report is available on the Kleiner Perkins Caufield & Byers site. It is also embedded at the bottom of coverage from The New York Times, an article that features some key takeaways that fall under six categories: 1) Mobile Is Moving Fast; 2) Wearables, Sharables, Drivables, Flyables; 3) The Personal Data Revolution; 4) Facebook Is Still the King of Social Media; 5) The Rise of the Visual Web; and 6) Americans Share Less Than the Rest of the World. 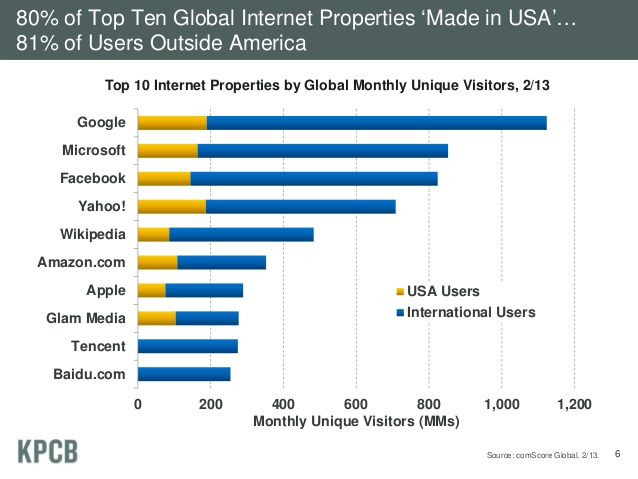 “There are about 2.4 billion Internet users worldwide, a gain of 8 percent from 2012, driven largely by emerging markets like Iran and Indonesia,” summarizes NYT. “And there are 1.5 billion mobile subscribers worldwide, compared with 1.1 billion a year earlier. That’s roughly 30 percent growth. In addition, mobile makes up 15 percent of Internet traffic over all.”

“The last few decades were about the rise of the personal computer and the smartphone,” adds NYT. “The next few decades will be about wearable computing, like Google Glass and fitness tracking bracelets, as well as new gadget categories like drones and smarter cars. That, in turn, will drive the personal data revolution.”

Meeker suggests the personal data revolution is poised to explode. While photos are currently the most popular personal content we share today, personal data from wearables, videos and audio files will continue to grow. 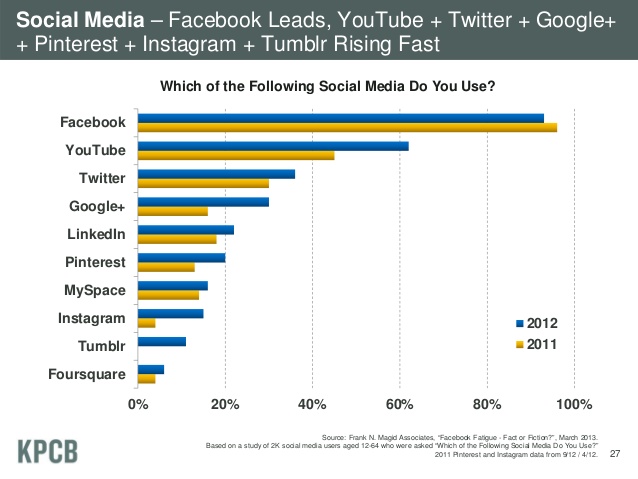 Facebook still dominates social media activity, despite being the only major social media platform with declining use in 2012 (see chart above). It also appears to be successfully transitioning to mobile. Other social platforms continuing to grow include YouTube, Twitter, Google+, LinkedIn, Pinterest and Instagram.

“On average, more than 500 million photos are shared each day,” writes NYT. “Meeker said she expected that figure to double year over year. Snapchat is leading the charge, with Facebook and Instagram following closely behind. Meeker said that Snapchat has doubled its usage in the last two months and that the company’s success was interesting because none of the content that flows through the private messaging application is tagged or findable.”

Quartz lists some additional highlights from the report’s slides:
1) More than half of the 500 million photos uploaded every day are on Facebook.
2) About 100 hours of video is uploaded to YouTube every minute.
3) Mobile Internet traffic as a percentage of all Internet traffic is expected to continue growing one-and-a-half times per year. It is currently 15 percent.
4) Smartphone users check their devices about 150 times a day.
5) On Groupon, 45 percent of transactions are conducted with mobile devices.
6) China now has more users of Apple’s iOS and Google’s Android mobile operating systems than the United States does. Additionally, mobile Internet access surpassed PC Internet access in China for the first time.