The most notable change this year was that smartwatches have supplanted standard handsets to become one of what Koenig refers to as “the magnificent seven” devices. “This is a marker of the global impact that wearables are starting to have,” he said. “Wearables are an example of how we expand the scope of the report. As smart homes gain momentum, you’ll see data on that too.” 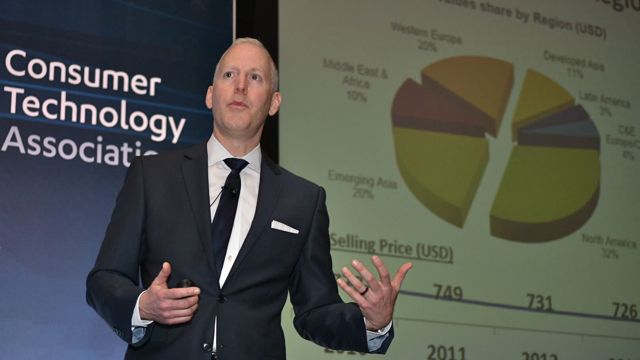 The second notable data point is that, globally, smartphones account for a whopping 47 percent of all global consumer technology spending. One reason for that, said Koenig, is that, “consumers in emerging markets prioritize around smartphones.”

“Consumers who have to be choosy with discretionary dollars and have to pick just one tech device pick the smartphone,” he explained. “It gets them connected and gives them access to information. Mobility makes the world go around.”

Although smartphones are the “super massive market,” reports Koenig, “we’re starting to see revenue growth moderate and flatten.” “If this device sees revenues flatten, we may see a similar impact across the broader landscape,” he said, noting that 60 percent of that smartphone revenue is attributable to emerging markets.

Tablets peaked in 2014 and are now trending lower. “They used to bridge the gap between handsets and laptops,” according to Koenig. “Now, ironically, they’re being squeezed by those same two devices.” Global PC volumes have also potentially crested. “It’s mostly attributable to the decline in tablets,” he said. “Revenues follow the same trend. There is a lot of price competition in the mobile PC market, but that is also moderating.”

Global TV volumes are also leveling off, and Koenig revealed why. “It’s a function of the ongoing diffusion of video content consumption, based on a sea change in human behavior,” he said. “Look no farther than Apple, which renamed the video app the TV app. Now, watching TV can be on any device, and that’s the dynamics behind that number.”

CTA will continue to keep close tabs on the data regarding U.S. consumers. “When less than half of video content consumption is on a TV, that will be an inflection point,” he said.

Nonetheless, 2017 will show substantial upticks in global sales of 4K UHD TVs with HDR, much of that attributable to China where a lot of those TVs are made. Koenig also reports that, “OLED is beginning to make itself felt,” and predicts related announcements at CES 2017. But he believes that OLED will be “a next decade story.”

With regard to wearables, innovation has been “in high gear,” with “lots of form factors and applications.” “Wearables are a global phenomenon,” he said. “It’s not just Japan and the U.S. Innovation is fueling lots of growth. We need new organic growth in global consumer tech sales, and we’re getting it from wearables.”