Higher dynamic range in both the cinema and CE viewing experience was a recurring message yesterday at Con-Tech: The 2015 Preview Seminar. The NAB Show and the International 3D and Advanced Imaging Society held a seminar on content and technology trends including 4K production, color gamut, HDR and new workflows. The event, hosted by Paramount Pictures, featured panelists from companies such as Barco, CableLabs, Disney, DreamWorks Animation, Film Magic, Lionsgate, RealD and Technicolor.

Trends in digital cinema was the first topic of the morning. Former president of Sony Pictures Technology Chris Cookson noted that the technology trialed in the controlled environment of theaters leads what gets incorporated into consumer electronics. He singled out the importance of high dynamic range and wider color gamut. 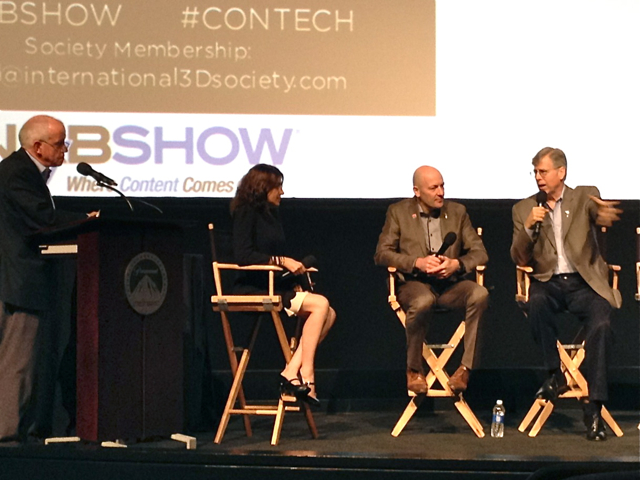 Barco SVP Wim Buyens articulated two trends in cinema: 1) iPads and kids’ expectations of what an entertainment experience should be, and 2) the globalization of cinema, with an emphasis on China. He noted that of the 100,000-120,000 screens worldwide today, 40,000 are in the U.S. and 20,000 are in China. He expects China to eventually have 40,000 screens, equaling the U.S.

Towards the start of the “UHD: Views You Can See” panel, Phil McKinney, president and CEO of CableLabs reinforced some of Lude’s points by explaining that resolution by itself is not enough. “Consumers get excited about HDR,” he said.

The panel, with representatives from the U.S., Mexico, United Kingdom, Germany, and China, agreed that UHD TV appears to be inevitable. One channel in Mexico already captures 100 percent of its programming in 4K, although they broadcast it in HD. The common sentiment was 4K capture will be common, and 4K workflow investment is unclear, but that 4K capture makes the 2K-to-4K up-rez for the consumer device look better.

On the topic of HDR, Technicolor VP Mark Turner noted that the greater bit depth to enable HDR adds 15-20 percent to the file size, regardless of the image resolution. 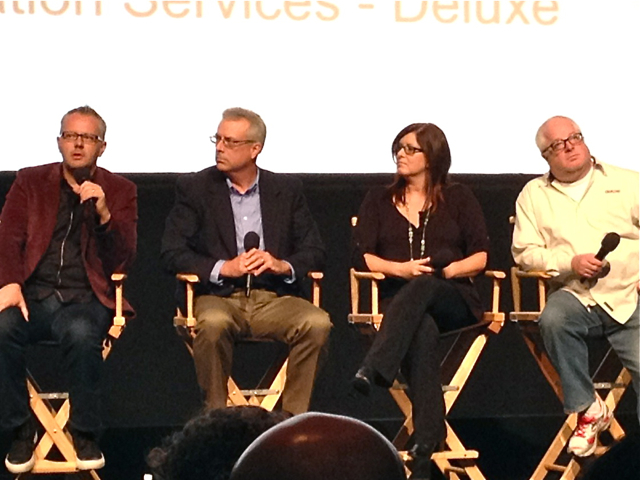 As for 8K TV, reporter Carolyn Giardina reminded the audience that Japan expects to test 8K broadcasts during the 2016 Rio Olympics, and have them commercially deployed for the 2020 Tokyo Olympics. Fraunhofer 3D Innovation Center Executive Manager Kathleen Schroter said that 8K is needed for an acceptable autostereoscopic display experience.

3D, especially in theaters, remains huge in China. Percy Fung, CEO of Film Magic, said that virtually 100 percent of multiplexes in China have 3D screens. Families enjoy getting out of the house, and 3D movies are a destination. He said that he’s seen people stand in line up to a remarkable 11.5 hours to see a 3D movie!

Before moderating the “HDR: Hollywood’s New Creative Power Tool” panel, Disney’s Mike DeValue said that HDR is about expanded dynamic range, not just the limits of dynamic range. A candle flame contains many colors, but will appear white on screen if there is inadequate sensitivity in the dynamic range. The human eye has a range of 20,000-0.001 nits, while the average HDTV has a 100-0.117 nits range. The I3DS has set up a working group to educate the community and promote HDR.

Jim Mainard, DreamWorks Animation’s head of digital strategy & new business development, posited that if you put animation filmmakers in a room and showed them examples of all of the variables — high dynamic range, high frame rate, wider color gamut, etc. — they would almost all say that high dynamic range and extended gamut are the ones that they want.

JoDee Freck, SVP mastering and technical services at Lionsgate, pointed out that HDR and wider gamut are related. They add “richness” to the image. Even sepia and black-and-white benefit from the richness of HDR and wider gamut. Mainard added that HDR is a very feasible upgrade from a filmmaking perspective. The economic benefits of 4K aren’t as simple or as clear.