“Sports Jeopardy!” is a new 30-minute weekly game show that streams via Sony’s online service Crackle. The show made its premiere on Wednesday, featuring well-known sportscaster Dan Patrick as host. More than 30,000 potential contestants registered online and qualified by successfully competing a 30-question trivia test. The show takes a new approach in the digital era, streaming online via Crackle and featuring a mobile app that allows viewers to play along.

“Here’s the concept: It’s sports and ‘Jeopardy!’ End of pitch,” said Executive Producer Harry Friedman. “It just seemed like a natural extension of the ‘Jeopardy!’ format, and the growth of sports just simply can’t be denied.” 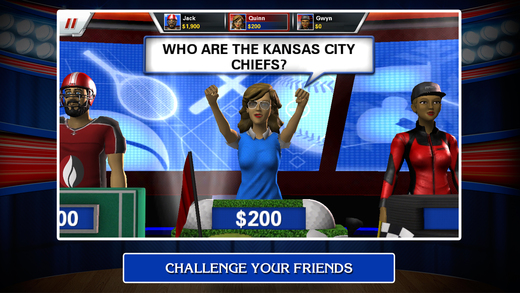 In contrast to the long-running “Jeopardy!” quiz show, the winner of each game takes $5,000. From there, the top three contestants over the course of a season have the chance to win $50,000.

“‘Sports Jeopardy!’ is perhaps the boldest attempt to adapt the quiz show to the digital age, testing the endurance of the ‘Jeopardy!’ brand,” suggests The New York Times. “At the same time, the sports-themed program points to a broader push at Crackle to reach the elusive young male viewer.”

“Sports Jeopardy!” allows Sony to move into the sports market without the necessity of owning media rights to live sports events.

The “Jeopardy!” team came to the sports-themed concept in 1996 and pitched the idea to ESPN. However, ESPN had scheduling conflicts and the concept did not surface again until last fall.

“The average ‘Jeopardy!’ viewer is older than 65, but Sony executives hope that the iconic ‘Jeopardy!’ brand, the sports twist and other digital extras will lure younger viewers,” reports NYT.