YouTube Capture is an easy-to-use app that allows smartphone and tablet owners to record videos of any length that can then be edited and shared. Google updated YouTube Capture for iOS this week with new editing features geared toward those who want to take their creativity beyond simple Vine and Instagram options. With the update, users can easily record video footage, edit, rearrange multiple clips and add music to create a single video.

With the new version of YouTube Capture for iOS, “users can now film and edit together multiple clips in order to create seamless footage before uploading,” explains Engadget. “The ability to trim and rearrange individual clips is also built in now, as is the ability to tack on sounds from both YouTube Audio and personal iTunes Libraries.” 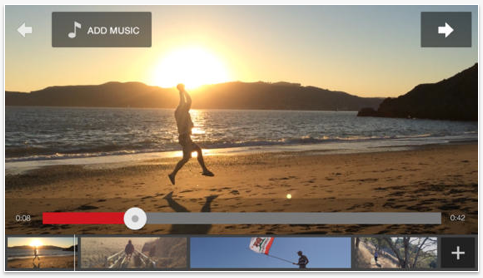 “While holding your iPhone or iPad in landscape mode — YouTube still opts for a traditional aspect ratio — you can now record your shots using the tap and hold gesture pioneered by Vine,” reports The Next Web. “There’s still the option to just press the on-screen record button for longer shots, but it’s clear that Google is striving for a far simpler user experience across all aspects of the app.”

“Finished clips bounce into a circular bubble in the top right-hand corner, with a time-stamp to display the total duration of your combined shots. Tapping the bubble brings up a trimmed down editing mode where – again, just like Vine – you can rearrange shots as you please. By pressing the plus symbol in the bottom right-hand corner of the screen, you can also import new clips that are already stored in your Camera Roll.”

Tapping clip thumbnails shows a frame-by-frame breakdown that allows for simple trimming. Music can be added from the user’s personal music library or YouTube’s collection of backing tracks.

“If you’re feeling shackled by the 6 and 15-second video restrictions imposed by Vine and Instagram, it’s worth taking another look at YouTube Capture,” suggests TNW. “Unless you own an Android device, of course.”